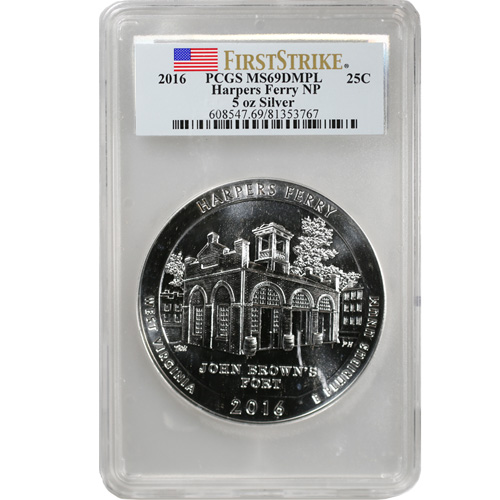 The coins of the America the Beautiful Series at the United States Mint come with 5 oz silver coins bearing designs celebrating America’s important cultural sites and natural wonders. The 2016 release included five individual designs, including one relevant to the events leading up to the US Civil War. Now, certified near-perfect 2016 5 oz Silver ATB Harpers Ferry National Historical Park Coins are available to you for purchase online from Silver.com.

The site now known as Harpers Ferry National Historical Park was originally founded as a personal ferry business at the confluence of the Shenandoah and Potomac Rivers. John Harper had acquired the land from the Virginia legislature in 1751 and established his namesake ferry business.

During his time in office as President of the United States of America, George Washington chose the site for the construction of a federal armory. Water power from the rushing rivers provided power for manufacturing processes at the armory.

The obverse side of 2016 5 oz Silver ATB Harpers Ferry National Historical Park Coins comes with a depiction of President George Washington. The design was created by John Flanagan and was issued for the first time in 1932 on the US quarter. The design was placed on the quarter at that time in honor of the 200th birthday of Washington that year.

On the reverse field of 2016 Silver ATB Harpers Ferry National Historical Park Coins is a depiction of a firehouse at the site. The building is known as John Brown’s fort because of the raid Brown and his abolitionist militia launched on the site in 1859. Brown briefly took control of the site before his forces were defeated by US Marines.

These 2016 5 oz Silver ATB Harpers Ferry National Historical Park Coins are available to purchase in plastic slabs. The coins have Mint State 69 certifications that indicate the presence of full, original mint luster with no more than two minor detractions. Examples of those detractions include only minuscule contact marks or hairlines that are located outside of the primary focal points of the coin. DMPL coins are those specimens with deeply-mirrored, proof-like visuals.

Silver.com customer service is available to answer questions about silver for sale at 888-989-7223. Alternatively, you can chat with us live online or email us directly.