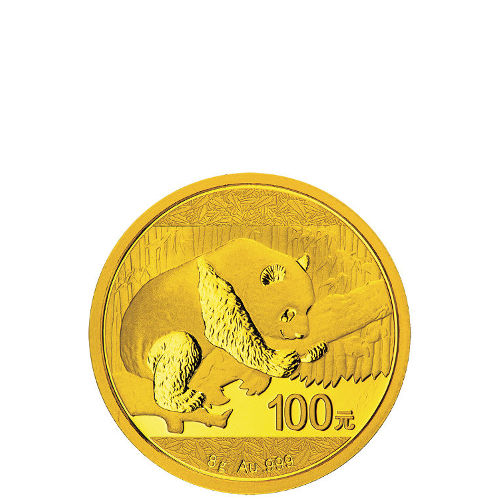 One of the numismatic world’s favorite precious metal coins just happens to bear the image of one of the most beloved creatures in the world, the docile Giant Panda. Considered an unofficial symbol of the nation of China, this creature has appeared on the official gold bullion coin of the nation since 1982. Right now, the 2016 8 Gram Gold Chinese Panda Coin is available on Silver.com.

The Chinese Panda bullion and proof coin program was already among the world’s more unique precious metal products. Since the coins were introduced in gold in 1982, the obverse design of the Giant Panda has been changed every year, with the exception of 2001 and 2002.

Now, investors and collectors will notice another change to the popular Gold Chinese Panda coin. Rather than listing the weight of its products in troy ounces, the Chinese Mint will now use grams to match the country’s use of the metric system. Chinese Panda coins will be available in 2016 in gold with weights of 1, 3, 8, 15, and 30 grams, and in silver with a weight of 30 grams.

On the obverse face of each coin you’ll find the latest giant panda design. The bamboo shoot wall has become a fixture of the design in recent years, dominating the background of the image. In the foreground, a docile giant panda rests on a fallen tree trunk.

The reverse features the Temple of Heaven. Constructed by the ruling dynasty in the 15th century, it has served a place of worship, council, and even sacrifice in the 500 years since it was built.

Chinese Mint products are struck under the authority of the People’s Bank of China, using facilities in Beijing, Shanghai, and Shenyang, among others.

We encourage Silver.com shoppers to ask questions when they arise. You can reach out to us on the phone at 888-989-7223, connect with us online using our website’s hosted chat service, or submit your questions to us in writing via your email address.