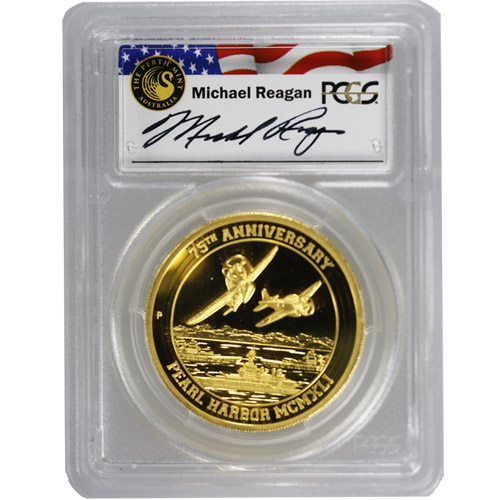 The Perth Mint has some of the best options available to those who buy gold online. The gold coins of the Perth Mint are exceptionally popular with buyers around the world. Perth not only issues legal tender Australian coins, but also coinage for the likes of Niue and Tuvalu, Commonwealth nations in the South Pacific. Now, 2016-P 2 oz Gold Tuvalu Pearl Harbor Coins are available to you for purchase online from Silver.com in perfect condition.

The attack on Pearl Harbor occurred early in the morning on December 7, 1941. Hoping to strike a decisive blow on neutral America and cripple its Pacific Fleet, Imperial Japan launched an unprovoked attack on the Naval Station at Pearl Harbor, severely damaging countless ships within the US Navy Pacific Fleet. Four major battleships were sunk, four severely damaged, and more than 2,400 American lives were lost in the attack.

Japan’s surprise, unprovoked attack was part of a coordinated series of attacks meant to help it secure strategic resources in the region that were under the control of the United States, the United Kingdom, and the Netherlands. Unfortunately for Japan, the attack did not entirely disable the US Navy Pacific Fleet as all of its aircraft carriers were out to sea at the time.

The obverse of 2016-P 2 oz Gold Tuvalu Pearl Harbor Coins comes with an image of Queen Elizabeth II. This right-profile relief was designed in 1998 by Ian Rank-Broadley and served as the fourth-generation effigy of the Queen on British coins until 2015. It has also featured on the coins of Australia, New Zealand, Niue, Tuvalu, and the Cook Islands, among other Commonwealth nations.

On the reverse of the 2016-P Gold Pearl Harbor Coin is an image of Japanese planes launching the attack on Pearl Harbor. Though four American battleships were sunk in the attack, all but the USS Arizona were raised from the waters, repaired, and sent back into action later in World War II.

Silver.com customer service is available at 888-989-7223. We are also available online using our live chat and email address.