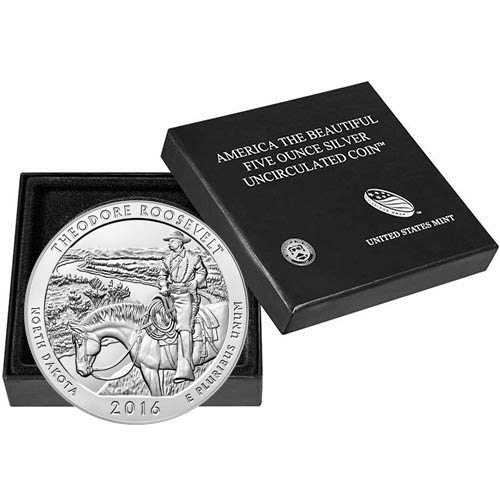 The Burnished Silver ATB coins from the United States Mint are produced in a manner that is unique from the bullion version of the coin. Like its counterparts in the American Eagle Series, Burnished ATB coins have distinctive visuals with a matte appearance that is different from the look of the bullion coins. Right now, 2016-P 5 oz Burnished Silver ATB Theodore Roosevelt National Park Coins are available to purchase online at Silver.com.

Each 2016-P 5 oz Burnished Silver ATB Theodore Roosevelt National Park Coins is offered by the United States Mint with a presentation case to house the coin. Burnished ATB coins are individually packaged and come with a Certificate of Authenticity from the US Mint.

The Burnished Silver ATB coins are vapor blasted after minting. The overall minting process involves individually striking the coins and removing them for vapor blasting. The result of this final step in the production process delivers a matte, frosted appearance to the coin’s design elements.

On the reverse side of 2016-P 5 oz Burnished Silver ATB Theodore Roosevelt National Park Coins is a depiction of Theodore Roosevelt. The longtime soldier, former Vice President of the United States, and one-time President of the United States, Roosevelt was a famed outdoorsman and hunter. The park in North Dakota that bears his name today is in honor of his efforts at preservation during his administration in the early 20th century.

The obverse of 2016 5 oz Burnished Silver ATB Theodore Roosevelt National Park Coins includes an effigy of President George Washington. In 1932, Congress authorized putting Washington’s effigy on the quarter in honor of his 200th birthday. John Flanagan developed the bust based on a sculpting completed in 1786 by William Cousins.

All Burnished Silver ATB Coins are produced at the Philadelphia Mint rather than the West Point Mint. The coins also differentiate from their bullion counterparts with a “P” mint mark on the obverse under the national motto “In God We Trust.”

If you have any questions about silver for sale, please feel free to call us. Silver.com customer service is available at 888-989-7223, online using our live chat, and via our email.