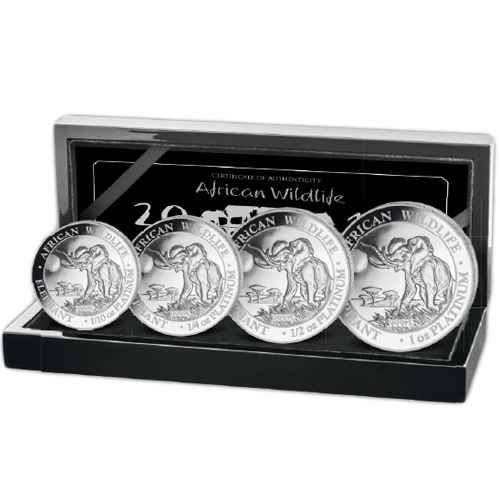 The Somalian Elephant coin series debuted in 1999 as the Zambian Elephant, but shifted to Somalia starting in 2004. Since its introduction, these coins have been highly coveted by collectors because the design on the obverse of the African Elephant is changed each year. On top of that, the coins originally had extremely limited mintages.

On the reverse of each Platinum Somalian Elephant is the image of the coat of arms for Somalia. It features a singular star against a background of horizontal lines across the heraldic shield. The face value of each coin is engraved on this face along with a year of issue mark.

The obverse of the 2016 Platinum Somalian Elephant Proof Coins in this set feature the 2016 design of the African Wildlife Elephant coins. It depicts a large bull elephant standing at the edge of a river, with its trunk raised and a bellow going out into the distance.

All Somalian Elephant coins are struck originally by the Bavarian State Mint, which is a state-owned entity of the Free State of Bavaria in Munich, Germany. This premium proof coin set is a product of Emporium Hamburg, a private coin dealer in Germany.

We encourage Silver.com shoppers to reach out to us with questions. You can contact Silver.com customer service at 888-989-7223, online using our live chat, or via email.