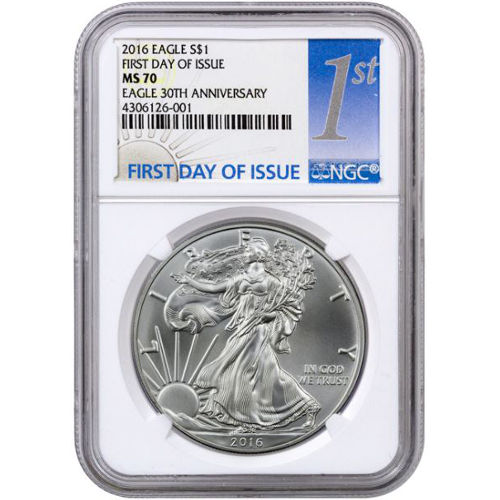 Today the United States Mint celebrates the 30th anniversary of the Silver Eagle. Each of the 2016 Silver American Eagles in this listing has a Mint State 70 grade from the NGC. Coins in this condition exhibit full, original mint luster and lack flaws of any kind of the surface.

In order for these coins to earn the First Day Issue designation, they had to arrive at the NGC or an approved NGC depository with the first 24 hours of the release date set by the US Mint. Alternatively, coins could arrive within 24 hours of the postmark on the box as long as it was the date of release set by the Mint.

Former-US Mint Chief Engraver John Mercanti created the heraldic eagle design on the reverse. Mercanti’s first project as Chief Engraver was the Silver American Eagle design. He held this post from 1985 to 2010, and it has yet to be filled following his departure.

Please contact Silver.com with all questions regarding these Silver American Eagles. You can call us at 888-989-7223, chat with us live online, or send us an email.