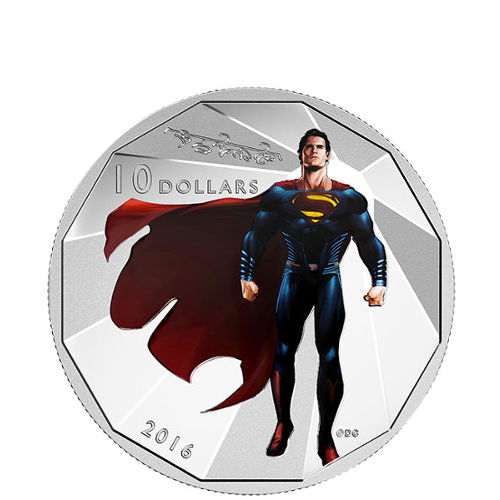 Superman is the world’s oldest superhero, first introduced to a young generation of children in 1938. Today he is one of many superheroes whose feats capture the imagination of an entirely new generation, young and old alike. The Royal Canadian Mint is celebrating the upcoming release of the Dawn of Justice feature film, and commemorates the moment with a 2016 Canadian Silver $10 Batman v. Superman: Dawn of Justice Superman Coin available on Silver.com.

The all-new line of $10 silver coins from the Royal Canadian Mint celebrating the release of Dawn of Justice includes four separate coin releases. The first of these was the Dawn of Justice logo, which includes Superman’s iconic “S” within the Batman shield. This Superman coin is the 2nd in the series, with future releases to include Batman and Wonder Woman.

All coins in the series feature a unique shattered-glass image in the background. The Royal Canadian Mint achieves this appearance with alternating fields of mirrored-finish and matte, creating contrast that mimics broken glass.

On the reverse of the coin is the colorized image of the Man of Steel, standing tall and proud. Engravings include the year of issue, face value of the coin, and a Kryptonian syllabic phrase as created by Canadian linguist Dr. Christine Schreyer.

The obverse features the familiar right-profile portrait of Queen Elizabeth II. Her Majesty’s effigy appears on all Canadian currency, and is accompanied on these coins by engravings that read “Elizabeth II,” “D.G. Regina,” and “Canada.”

Royal Canadian Mint coins are world renowned for brilliant designs and a minimum fineness of .9999 in both silver and gold. Founded in 1908, today the mint consists of facilities in Winnipeg and Ottawa.