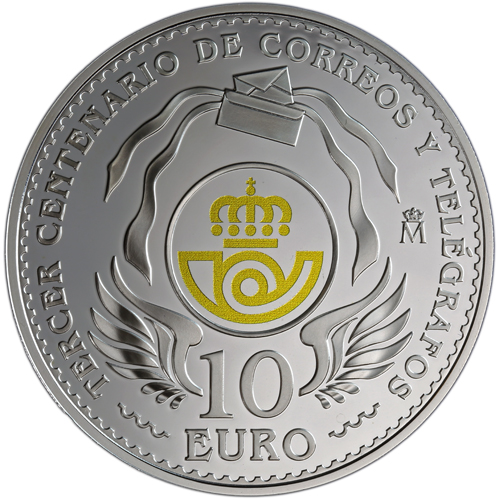 The year 2016 marks the 300th anniversary, or tercentenary of the Spanish Postal Service. The Fabrica Nacional de Moneda y Timbre, or Royal Mint of Spain, now releases a beautiful silver coin in honor of the nation’s postal service to mark the occasion. Today, the 2016 Silver Spanish Post Coin is available on Silver.com in BU condition.

Spain’s postal service is one of the oldest established systems of its kind in the world. Originally implemented under Royal Warrant by King Philip V, the initial role of the post was to deliver the King’s orders and diplomatic dispatches. This warrant was issued in 1716 and is considered the founding of what would become the modern post office.

While this is the founding date of the post office, the Spanish Post’s evolution began in 1743 when it was re-organized into a national service with a regulated network of post offices and the official appointment of a Correo Mayor, or Postmaster General. That evolution was furthered in 1850 with the first-ever issue of a Spanish postage stamp.

Known officially as the Sociedad Estatal de Correos y Telegrafos, the 2016 Silver Spanish Post Coin’s reverse face includes the crowned post horn, which is captured in brilliant gold coloring in the center of the design. Surrounding it are the engravings of “Tercer Centenario de Correos y Telegrafos” and “10 Euro.”

The obverse side of the 2016 Spanish Post Coin features a left-profile portrait of the nation’s current King, His Majesty Felipe VI. King Felipe VI has been on the throne since 2014 when his father, King Juan Carlos I abdicated after a 39-year reign. Engravings on this face include “Felipe VI Rey de Espana” and “2016.”

Each of these 2016 Silver Spanish Post Coins has a Brilliant Uncirculated grade, which indicates a lack of wear and tear. However, BU coins often have minor flaws such as breaks in the luster, spotted surfaces, or contact marks from striking.

These 2016 Spanish Post Coins are a product of the Royal Mint of Spain, which was formed in the 18th century following centuries of other private and public mints in use throughout the country.

Please contact Silver.com with any questions. You can reach us at 888-989-7223, chat with us live online, or email us with your inquiries.