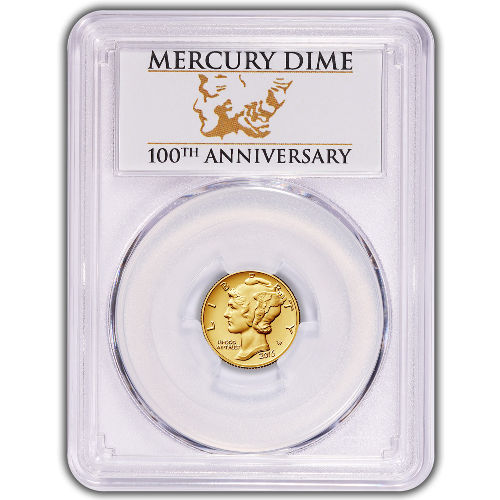 Adolph A. Weinman is one of the greatest artists to ever work with the United States Mint. His Walking Liberty design is regarded as one of the greatest in US Mint history, and currently graces the Silver American Eagle’s reverse. Now, the US Mint is celebrating one of his many other great designs with the release of a centennial coin. The 2016 1/10 oz Gold American Mercury Dime coin is available now in perfect condition.

The United States Mint is celebrating the 100th anniversary of three iconic coin designs from the mint’s history. Adolph A. Weinman is responsible for two of the three designs to be featured, with the third coming from Hermon Atkins MacNeil. All three designs debuted in 1916, and featured on common currency in American circulation.

Each of the 2016 1/10 oz Gold American Mercury Dime Coins in this product listing bears a SP70 grade from the PCGS. Coins in this condition exhibit full, original mint luster and feature no detracting flaws of any kind.

The First Strike designation is reserved for coins received by the PCGS within the first 30 days of the release date set by the US Mint. Additionally, the PCGS ships these coins with a commemorative 100th Anniversary label to mark the occasion.

On the obverse face of the coin is Weinman’s Winged Liberty cap. In the depiction, Liberty wears a Phrygian cap that confused many on the original design. Liberty appeared to many to resemble the Roman god Mercury, hence the name Mercury Dime.

The reverse side of the 2016 1/10 oz Gold American Mercury Dime features the original design of the Roman fasces from Weinman. In the design, a Roman fasces is intertwined with an olive branch. This is meant to symbolize the nation’s readiness for war, but desire for peace.

If you have any questions, please contact Silver.com about these Gold Centennial Coins. You can call us at 888-989-7223, connect with us live online using our web chat, or send us an email.