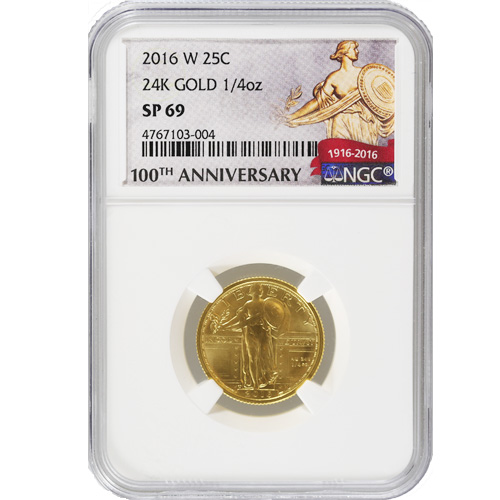 In 1916, the United States Mint continued its revival of American coin designs in the early 20th century with three new designs on its three most important circulation silver pieces. The dime, quarter, and half dollar all received new visuals on the obverse and reverse in 1916. In 2016, the US Mint marked the centennial of that event by reviving each design on a 24-karat gold bullion coin. Now, near-perfect 2016-W 1/4 oz Gold American Standing Liberty Quarters are available to you for purchase online at Silver.com.

This is the first reuse of the Standing Liberty Quarter design by the United States Mint. Of the three images that debuted in 1916, the Standing Liberty design was the shortest-lived. The US Mint used it through 1930 before canceling it. No new quarters were struck by the mint in 1931, and when coining resumed in 1932, President George Washington’s now-familiar portrait on the quarter made its debut.

The obverse of these 2016-W Gold American Standing Liberty Quarters comes with the image of Lady Liberty standing in the gap of a wall. Reflective of America’s cautious view toward World War I in Europe, the Standing Liberty shows her figure holding an olive branch in her right hand on the heraldic west field of the coin, while her gaze is fixed to the heraldic east and her left hand clutches a shield to defend the nation.

On the reverse of 2016-W 1/4 oz Gold Standing Liberty Quarters is the design of the American bald eagle. In this work of art, the bald eagle soars majestically through the sky with its wings flexed out to the maximum extent.

These 2016-W 1/4 oz Gold American Standing Liberty Quarters are near-perfect specimens. SP69 coins showcase full, original mint luster with a maximum of two minor detractions. Those detractions are limited in nature to minuscule contact marks or hairlines and limited in scope to the areas outside the primary focal points.

Silver.com customer service is available at 888-989-7223 to answer your questions about gold for sale. You can also chat with us live online or email us directly.