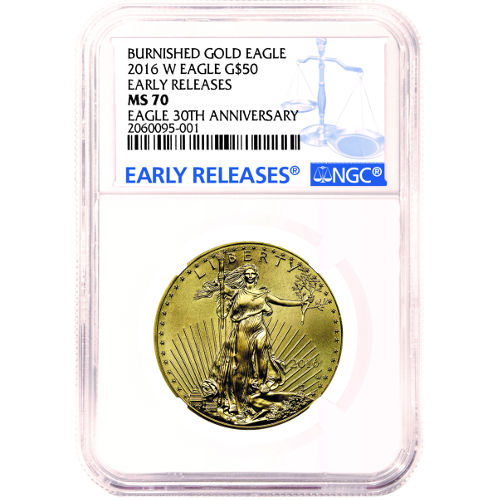 Burnished coins from the United States Mint receive special treatment from start to finish. Each gold blank is handled by gloved workers at the United States Mint’s West Point Mint facility. Each blank is loaded into drums and polished with small marbles to give the coin its unique appearance, and then loaded one at a time into the coining press by hand, and removed in the same fashion.

Each of the 2016 1 oz Burnished Gold American Eagle coins in this listing from Silver.com features an MS70 grade from the NGC. Coins in this condition exhibit full, original luster from the mint and no detracting flaws of any kind.

As an Early Release coin, these products had to arrive at the NGC or an approved depository within the first 30 days of the release date the US Mint set for the Burnished Gold American Eagle in 2016.

Augustus Saint-Gaudens’ Liberty depiction graces the obverse of each Gold American Eagle coin, while the reverse is highlighted by the family of nesting bald eagle design created by Miley Busiek.

If you have any questions, please feel free to ask Silver.com. Our associates are available on the phone at 888-989-7223, online using our live web chat, or via our email address. To see similar products, visit our Graded Gold American Eagles page.