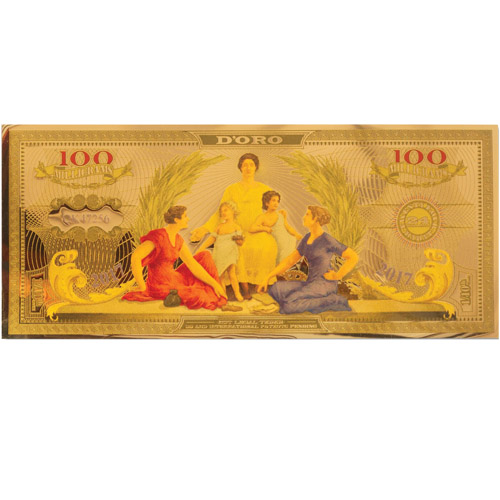 The Educational Series of designs on Bureau of Engraving and Printing notes in the United States were released between 1896 and 1899. The series had only three primary denominations, with several others planned, but not issued. The $2 Silver Certificate design was particularly popular in this series and is replicated on a beautiful Gold Aurum Certificate. Right now, 2017 1/10 Gram Gold Aurum Educational Restrike Notes are available to you for purchase online at Silver.com.

Each of the 2017 1/10 Gram Gold Aurum Educational Restrike Notes listed here at Silver.com comes to you with an archival quality plastic currency sleeve. The gold notes are protected inside of these sleeves for shipping and display and come in brand-new condition. The design depicted on these gold notes is that of History Instructing Youth.

In 1896, the United States Treasury and the Bureau of Engraving and Printing set out to launch a new design series on the nation’s silver certificate notes. The notes of the Educational Series were available from 1896 to 1899. The obverse face of the notes depicted various neoclassical allegorical motifs, while the reverse featured two different American figures on an ornate background. In most cases, the Americans were famous individuals.

On the obverse side of the 2017 1/10 Gram Gold Aurum Educational Restrike Notes, you will find the image of various allegorical figures. Referred to broadly as History Instructing Youth, the design features an adult figure in the background considered to be Science. That figure is instructing the youth of the nation, each of which represents its own allegorical figure. These figures are considered to be Steam and Electricity being introduced to Commerce and Manufacture.

If you have any questions when you buy gold, please don’t hesitate to ask. Silver.com customer service is available to you on the phone at 888-989-7223, online using our live chat feature, and via our email address.