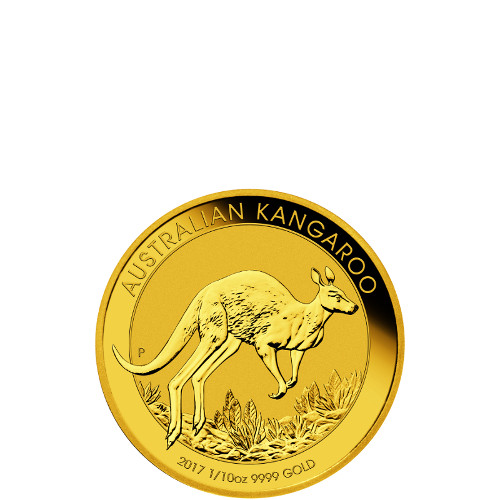 The Gold Australian Kangaroo is the Perth Mint’s longest running bullion coin release, even if it has undergone a name change and alteration in design concept. Introduced in 1986, the coin is now in its 32nd year of production and continues its use of new designs each year. Today, the 2017 1/10 oz Gold Australian Kangaroo Coin is available to purchase on Silver.com.

The kangaroo is one of Australia’s most beloved creatures, and a symbol for the nation that is known around the world. Though not on the nation’s official crest, it is widely considered an unofficial logo and is used by countless entities ranging from the Royal Australian Air Force to the private airlines Qantas.

On the reverse of the 2017 1/10 oz Gold Australian Kangaroo Coin is the image of a kangaroo as it hops across the barren landscape. Engravings on this face include “Australian Kangaroo,” as well as the weight, purity, metal content, and year of issue for the coin.

The obverse of all Gold Australian Kangaroo Coins features the right-profile portrait of Queen Elizabeth II. Her Majesty’s effigy was created in 1998 by Ian Rank-Broadley, and features on the obverse of all Australian coinage released each year. This image is a fourth-generation depiction of the Queen.

Each 2017 1/10 oz Gold Australian Kangaroo Coin listed here today is in BU condition. Coins in this condition have no signs of wear and tear, but you may notice minor flaws including breaks in the luster, spotted surfaces, and contact marks from the production process.

Perth Mint is a state-owned entity of Western Australia. Originally opened in 1899 as part of the British Royal Mint, it remains today as the oldest operating mint in the nation following the closures of the Melbourne Mint and Sydney Mint.

Please direct your questions to a Silver.com associate. We’re available on the phone at 888-989-7223, online using our live web chat, and via our email address.