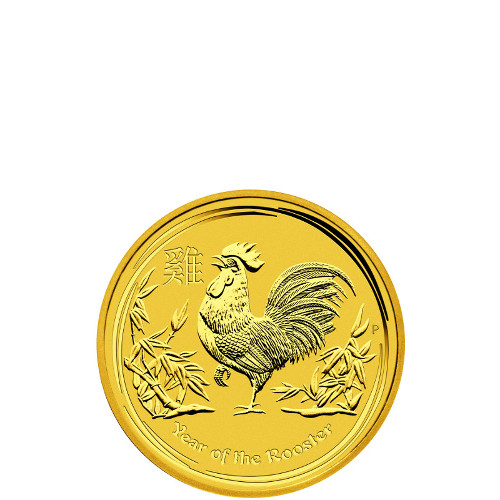 One of the smallest coins in the Lunar Series II coin program is now available from the Perth Mint. 2017 marks the Year of the Rooster on the Chinese Lunar Calendar, and the Perth Mint is celebrating with the release of eight gold coins in total. Today, the 2017 1/10 oz Gold Australian Rooster Coin is available in BU condition from Silver.com.

The Lunar Series II program started in 2008 with the Year of the Rat, starting over again where the original Lunar Series had started in 1996. The 12-year coin program features a new design on the reverse field each year honoring the specific creature represented on the Chinese Lunar Calendar.

Individuals born under the sign of a particular animal are said to share emotional and character traits with the animal. For example, those born in the Year of the Rooster are believed to be hardworking, sociable, honest, and loyal. The release of 2017 Gold Australian Rooster Coins marks the 10th release of Lunar Series II.

On the reverse of all 2017 1/10 oz Gold Australian Rooster Coins is the image of a tall, proud rooster standing on one leg among bamboo foliage and flowers. Engravings include “Year of the Rooster,” the Perth Mint’s “P” mint mark, and the Chinese symbol for rooster.

The obverse of all Australian coinage features Queen Elizabeth II’s right-profile portrait. Her Majesty’s effigy has appeared on commonwealth coinage since her ascension to the throne in 1952, with this image reflecting the fourth-generation depiction.

All 2017 1/10 oz Gold Australian Rooster Coins in this product listing are BU specimens. A coin with a Brilliant Uncirculated grade displays no signs of wear and tear, though you may notice minor flaws including breaks in the luster, spotted surfaces, or contact marks from the coining process.

Founded in 1899, the Perth Mint is the oldest operating facility in Australia. Other previous Royal Mint facilities in Sydney and Melbourne closed long ago. The Perth Mint is not affiliated with the Royal Australian Mint, but its coins enjoy legal tender status under the Currency Act of 1965.

Please don’t hesitate to reach out to Silver.com with questions. You can contact our customer service team at 888-989-7223, connect with us online using our live web chat, or email us directly.