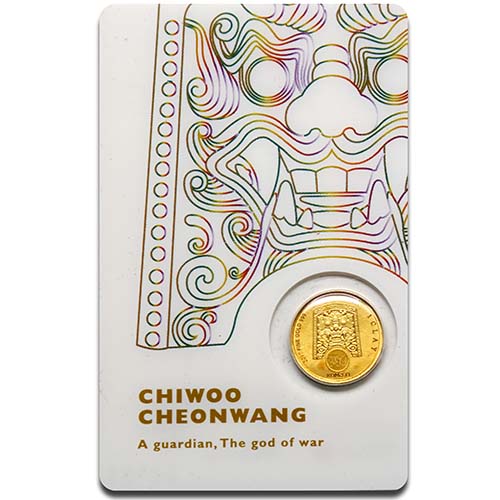 KOMSCO introduced the Chiwoo Cheonwang series in 2016 with a 1 oz silver medallion and a 1 oz gold medallion. After just one year availability, KOMSCO has expanded the program already after just one year to include the new 1/10 oz Gold Medallion, with special packaging options and a limited mintage issue. Today, 2017 1/10 oz Gold South Korean Chiwoo Cheonwang Medallion is available to you online at Silver.com with the white label package.

Chiwoo Cheonwang is a character whose history stretches back to the 26th century BCE. He was revered by Ancient Chinese cultures and early dynasties as the mythical God of War, due largely to his ability to control the weather during battle and cast magical spells on his enemies during battle to tilt the fight in his side’s favor.

The image of Chiwoo Cheonwang was chosen by KOMSCO as a representative of this debut South Korean series because of Chiwoo’s place in Korean culture. Some of the first people to migrate down the Korean peninsula came from regions of China in which those early people originated.

On the obverse of the Gold South Korean Chiwoo Cheonwang Medallion is the design of Chiwoo’s shield. It features a depiction of his battle mask and includes inscriptions of the nation of issue, weight and purity of the medallion, as well as the latent security device used on the medallions in the series.

The reverse of the 2017 1/10 oz Gold South Korean Chiwoo Cheonwang Medallion bears the image of Chiwoo. He is depicted on the new issues of the medallion on the back of his war horse, as opposed to the original depiction of Chiwoo on the ground before a battle. He still clutches his shield in one hand and a long spear in the other.

KOMSCO is the Republic of Korea’s official mint. In addition to printing banknotes and striking coinage for Korea, it prints other government documents and produces coinage and currency for other nations.

Please don’t hesitate to contact Silver.com at 888-989-7223 with questions. You can also reach us online through our live chat and at our email address.