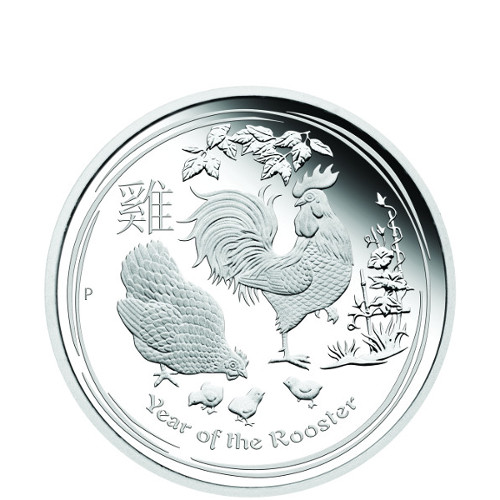 There is no series of silver and gold coins in the world more popular among collectors than the Lunar Series II program from the Perth Mint. These coveted coins are highly sought-after each year, and their low mintages and unique designs make them an excellent piece in any collection. Right now, the 2017 ½ oz Proof Silver Australian Rooster Coin is available to purchase on Silver.com.

The Lunar Series II coin program from the Perth Mint has reached its first major milestone with the 10th release in the series. The coins are released featuring animals on the Zodiac, with each new design devoted to the animal appearing on that given year’s Chinese Lunar Calendar.

2017 is the Year of the Rooster, and the all-new design from the Perth Mint focuses on the rooster. Those born under the sign of the rooster have sociable and loyal tendencies, and are believed to be hardworking and honest.

The reverse of the 2017 ½ oz Proof Silver Australian Rooster Coin includes the image of a rooster keeping a watchful eye out while a hen and three chicks eat among the bamboo foliage and flowers. Engravings read “Year of the Rooster,” “P” for the Perth Mint, and the Chinese symbol for rooster.

Perth Mint is the oldest operating facility in Australia. It was once responsible, along with the Melbourne Mint, in the 20th century for striking Australian coinage. The Currency Act of 1965 gave legal tender status to Perth Mint coins, but also founded the Royal Australian Mint as the federal, sovereign mint.

If you have any questions, please don’t hesitate to ask. You can reach Silver.com customer service at 888-989-7223, online using our live web chat, and via our email address.