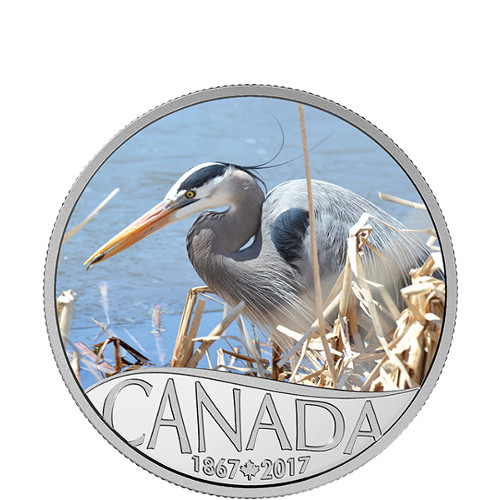 Canada became its own country in 1867 after being part of a commonwealth of nations that the United Kingdom had control over. Canada still has a close-knit relationship to the United Kingdom, but in honor of its 150th anniversary of its independence, the Royal Canadian Mint is releasing a series of coins. Today, you can purchase the 2017 1/2 oz Proof Silver Canadian Celebrating Canada’s 150th Series Great Blue Heron Coins at Silver.com.

The Royal Canadian Mint is celebrating the anniversary of Canada’s independence with a 13-coin series called Celebrating Canada’s 150th. This coin series features designs created by Canadian Geographic that represent Canada’s 10 providences and three territories. The Great Blue Heron design is the fourth in the series; it follows the Common Loon, Kayaking on the River and Lighthouse at Peggy’s Cove designs.

The reverse of each of these coins features a highly detailed image of a Great Blue Heron with a small fish in its beak. The bird stands in the waterways of New Brunswick surrounded by dry grasses. The original photograph was taken by Claude Belanger for Canadian Geographic.

The obverse of each coin depicts Susanna Blunt’s 2003 image of Queen Elizabeth II. This is the latest effigy of Her Majesty that is used on the new coinage from the Royal Canadian Mint.

As the sovereign mint for Canada, the Royal Canadian Mint creates all the currency for the country. The mint was founded in 1908 to prevent Canada from relying on London’s Royal Mint for currency. Now, there are two facilities, the original in Ottawa and a second operation in Winnipeg.