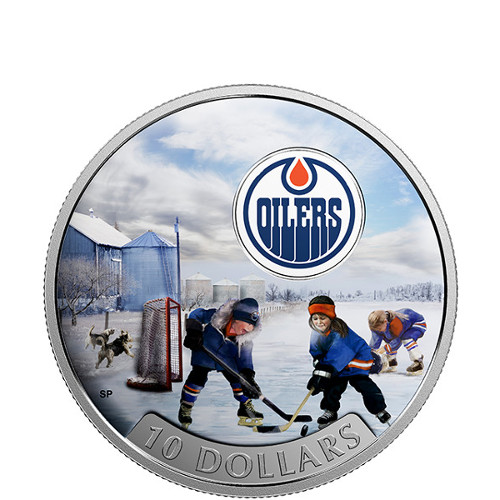 Like baseball in America, hockey is Canada’s national pastime and it has been enjoyed by people across the country for more than a decade. Although many in North America think of the United States when they hear National Hockey League, the league has seven Canadian franchises as well, all of which are celebrated in the Passion to Play Series. Today, the 2017 ½ oz Proof Silver Canadian Passion to Play Edmonton Oilers Coin is available from Silver.com.

The Edmonton Oilers are one of two NHL franchises in the province of Alberta, Canada. The Oilers were founding members of the World Hockey Association, forming in 1971 and playing their first season in the WHA in 1972. The team was meant to be one of two WHA franchises in Alberta, but the Calgary franchise moved to Cleveland, Ohio before the league began play.

For one season, the Edmonton Oilers played as the Alberta Oilers to represent the province as a whole. After just one season though, the team returned to the use of Edmonton Oilers, and have gone by that name every since. Edmonton joined the NHL in 1979 as one of four franchises joining in the WHA merger, and predate their Alberta rivals, the Calgary Flames, by one season in the NHL.

On the reverse of the 2017 ½ oz Proof Silver Canadian Passion to Play Edmonton Oilers Coin you’ll find the image of children in rural Alberta playing hockey on a frozen sheet of outdoor ice. As a dog frolics in the background and one child plays with another dog, two kids faceoff for the puck. The entire scene is colorized, and the Oilers logo features above the design field.

The obverse of all Proof Silver Canadian Passion to Play coins includes the image of Queen Elizabeth II, captured in right-profile relief and created in 2003 by Susanna Blunt. All coins in this collection are struck in cooperation with the NHL. The NHL and NHL shield are registered trademarks of the National Hockey League, and NHL and NHL team marks are property of the NHL and its franchises.

Please direct your questions to a Silver.com associate at 888-989-7223, connect with us online through our web chat, or send us an email with your inquiries. To see more products like this, go to our Royal Canadian Mint page.