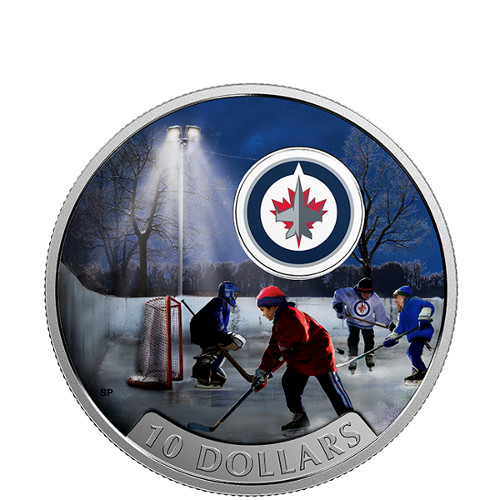 The youngest of the Canadian NHL franchises is the Winnipeg Jets. Originally founded in the city in 1972, that franchise technically resides in Phoenix now while the modern-day Jets were founded in Atlanta, Georgia at the turn of the 20th century. Right now, the 2017 ½ oz Proof Silver Canadian Passion to Play Winnipeg Jets Coin is available online at Silver.com.

The original Winnipeg Jets franchise now resides in Phoenix, Arizona as the Arizona Coyotes. That team left Winnipeg as one of two Canadian franchises to leave the nation during the 1990s, the other being the Quebec Nordiques. However, when the team left the city sued to retain the rights to the team’s name and original logo.

In 2011, the Jets made a return to the NHL in the city of Winnipeg when the struggling Atlanta Thrashers franchise, founded in 1999, moved from Georgia to Winnipeg and resumed the use of the team’s beloved franchise name.

On the reverse of the 2017 ½ oz Proof Silver Canadian Passion to Play Winnipeg Jets coin is the colorized design of a group of children playing hockey on a frozen, outdoor rink with boards but no glass. The Winnipeg Jets logo is included above the image of the children at play.

The obverse of all Passion to Play coins includes the effigy of Queen Elizabeth II. Designed in 2003, Her Majesty’s right-profile portrait is surrounded by engravings of her name, the nation of issue, and the coin’s year of issue.

All Passion to Play coins from the Royal Canadian Mint use the NHL and NHL Shield under the authority of the National Hockey League, which has trademarked these names and symbols. The NHL and NHL team marks are protected property of the league and its member franchises.

The Royal Canadian Mint was founded in 1908 in the city of Ottawa. Originally serving to refine gold and other precious metals from the Yukon Territories, the mint also provided Canada with independent control over its coining. Today it operates an additional facility in Winnipeg.

If you have any questions, please don’t hesitate to reach out to Silver.com. Our customer service team is available on the phone at 888-989-7223, online using our live web chat, and via our email address.