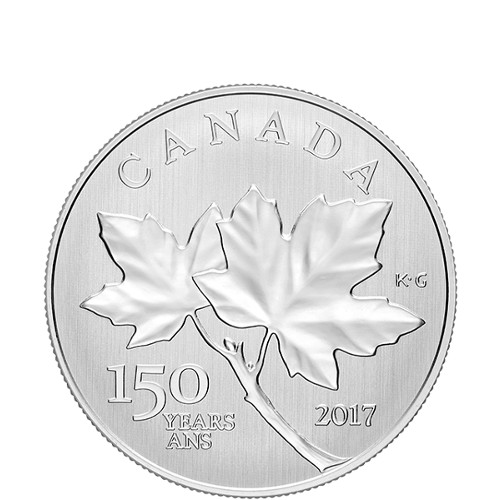 When it comes to national symbols, each nation of the world has those iconic images that citizens around the globe associate with a particular locale. For the nation of Canada, all-things outdoors tend to apply, but none is greater than the imagery of the maple leaf. As Canada celebrates the 150th anniversary of Confederation, the Royal Canadian Mint unveils a variety of silver for sale to commemorate the occasion. The 2017 ½ oz Silver Canadian 150th Birthday Maple Leaves Coin is available to you today online at Silver.com.

All the 2017 ½ oz Silver Canadian 150th Birthday Maple Leaves Coins in this collection have a unique finish. Specimen quality coins have a finish that shares common features and appearances with a proof coin, but is considered to be unique and brilliant in its own right.

On the reverse of the Silver Canadian 150th Birthday Maple Leaves Coin is the image of a lone, solemn branch that has two small maple leaves clinging to the end of it. Engravings include the words “150 Years/Ans,” “2017,” and the “K – G” initials of the designer, Kruger-Gray.

The obverse of all 2017 ½ oz Silver Canadian 150th Birthday Maple Leaves coins includes the right-profile effigy of Her Majesty, Queen Elizabeth II. She remains as the unofficial sovereign of Canada, and has appeared on Canadian coinage since her ascension to the throne of England in 1952.

Throughout 2016 and into 2017, the Royal Canadian Mint has released a variety of stunning coin programs to help celebrate the 150th anniversary of Canada’s confederation movement in 1867. The maple leaf, by far the most iconic symbol of the nation, is the focus of this brilliant coin from the Royal Canadian Mint.

We encourage all Silver.com customers to reach out to us with questions regarding our precious metal products. Our customer service team is available at 888-989-7223, online through our live web chat, and by sending us an email.