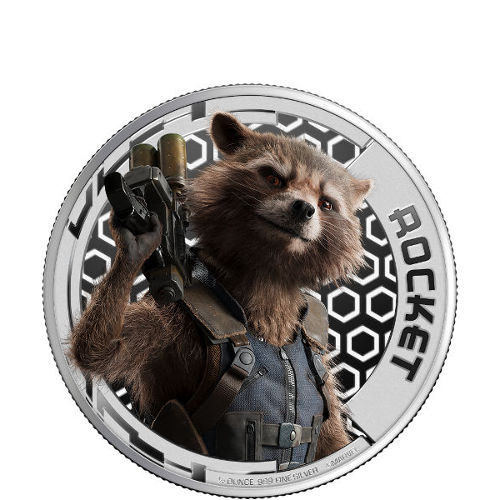 Officially announced at Comic-Con in San Diego in 2014, Guardians of the Galaxy Vol. 2 was released in 2017 from Marvel Studios and smashed the box office with its performance. Now, Marvel Comics is bringing the powerhouse feature film series to life on the face of colorized silver coins. Today, the 2017 ½ oz Silver Cook Islands Guardians of the Galaxy Rocket Coin is available to you online at Silver.com.

Guardians of the Galaxy Vol. 2 debuted in the United States in May 2017, and grossed a total of $859 million at the global box office. The film was the third-highest grossing release of 2017 at its time of release, and outperformed Vol. 1 in the series by nearly $100 million. The new Guardians of the Galaxy Silver Coin collection commemorates the popular comic feature film.

The coins in this collection ship inside of a collectible tin, with each coin individually encapsulated within the tin. Each of the Guardians of the Galaxy Silver Coins, including these 2017 ½ oz Silver Cook Islands Guardians of the Galaxy Rocket Coins, are available for individual purchase so you can collect your favorite characters, or in a five-coin collectible lunch pail so you can have them all.

On the reverse of the Silver Cook Islands Guardians of the Galaxy Rocket Coin you’ll find the image of Rocket the Raccoon. In the film, Rocket is voiced by popular actor Bradley Cooper and captured in motion capture technology by Sean Gunn. The image on this face of the coin is colorized to bring Rocket to life as in the feature film itself and includes an engraving of his name.

The obverse of the 2017 ½ oz Silver Cook Islands Guardians of the Galaxy Rocket Coin bears the portrait of Queen Elizabeth II. Her Majesty’s effigy appears on the obverse of all commonwealth coinage, with this particular design created in 1998 by Ian Rank-Broadley as a fourth-generation depiction of the Queen since 1952.

Please feel free to call Silver.com with any questions. We’re available on the phone at 888-989-7223, online using our live chat, or via our email address. The live price of silver is updated on our site throughout the day for your convenience.