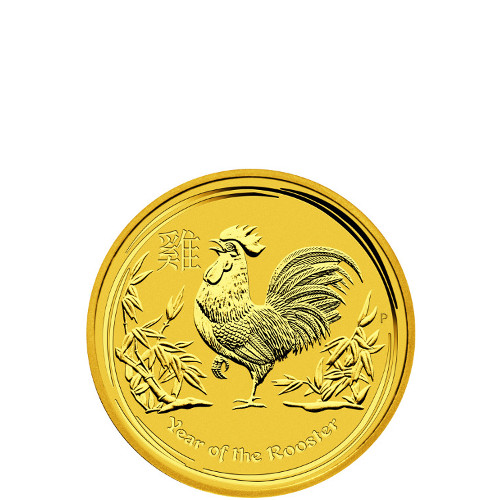 There are a growing number of lunar-themed coin programs available from mints around the world right now. The Perth Mint is responsible for creating this craze with its Lunar Series program that ran from 199 to 2007. Its program remains the most popular, and right now the 2017 ¼ oz Gold Australian Rooster Coin is available as a bullion coin in stellar condition on Silver.com.

Each of the 2017 ¼ oz Gold Australian Rooster Coins in this Silver.com product listing is a BU specimen. Coins in Brilliant Uncirculated condition show no signs of wear and tear, though you will notice minor flaws including breaks in the luster, spotted surfaces, and contact marks.

The 2017 Gold Australian Rooster Coin range includes four fractional weight coins and four coins at or above 1 oz in weight. The smallest of the fractional weights is the 1/20 oz coin, while the largest coin is the 1 Kilogram option.

On the reverse of the 2017 ¼ oz Gold Australian Rooster Coin you’ll find the Year of the Rooster image. It includes a single rooster, standing on one leg with a tall, proud figure. The name of the issue, Perth Mint mark, and the Chinese symbol for rooster are included on this side.

The obverse of the 2017 Gold Australian Rooster coins features the right-profile portrait of Queen Elizabeth II. Included on this side of the coin are the engravings of “Elizabeth II,” “Australia,” “1/4 oz 9999 Gold,” “2017,” and “25 Dollars.”

Australia’s Perth Mint is located in Perth, Western Australia. Opened in 1899 as a British Royal Mint facility, the mint remained in British hands until 1970 when it was turned over to the state government in Western Australia. The Perth Mint is separate of the Royal Australian Mint system, and its coins enjoy legal tender status under the Currency Act of 1965.

If you have any questions, please don’t hesitate to contact Silver.com. You can reach our customer service team on the phone at 888-989-7223, online using our live web chat service, or via our email address.