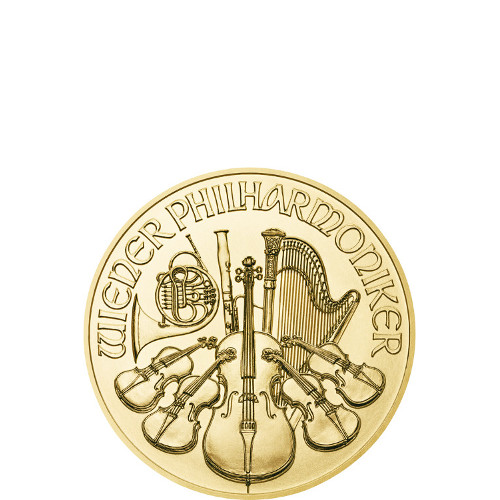 All Gold Philharmonic coins feature designs from Thomas Pesendorfer, who used the Vienna Philharmonic Orchestra as a source of inspiration. The orchestra was founded in 1842, and plays at the Musikverein Concert Hall in the Inner Stadt neighborhood of Vienna, the national capital.

All engravings on the Gold Austrian Philharmonic coin are in German, the native tongue of most Austrians. The face value of these coins has been listed in Euros since the adoption of the common currency of the Eurozone in 2002, but the coins are not considered legal tender outside of Austria.

Each 2017 1/4 oz Gold Austrian Philharmonic coins listed here today are in BU condition. Coins in BU condition show no signs of wear and tear, however you may notice minor flaws on the coins ranging from breaks in the luster and spotted surfaces to contact marks from the production process at the mint.

On the obverse of the 2017 1/4 oz Gold Austrian Philharmonic coin is the image of the pipe organ found within the Musikverein Golden Concert Hall. Located in the Innere Stadt neighborhood, it is home to the Vienna Philharmonic Orchestra.

The reverse of the Gold Austrian Philharmonic Coin includes numerous musical instruments used by members of the orchestra. These images include the cello, four violins, Austrian horn, and even a bassoon. Engravings on both sides of the coin are in German, which is the official language of the Austrian nation.

The Austrian Mint is the official sovereign mint of the government of Austria, and is one of the few in Europe authorized to produce Euros for the common currency zone of the European Union.

Please don’t hesitate to contact Silver.com with any questions. You can reach out to our customer service department at 888-989-7223, or feel free to connect with us online using our live web chat and email features.