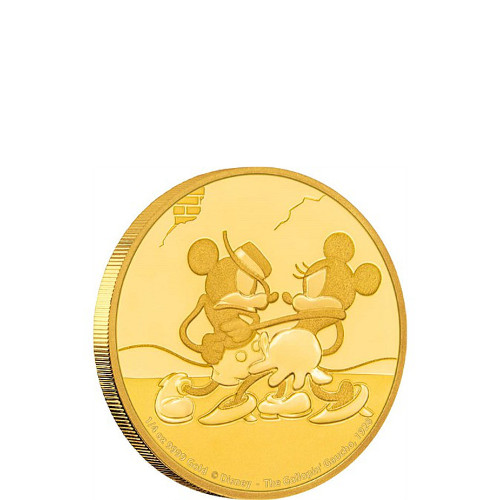 Mickey Through the Ages is a playful and exciting collection of gold and silver coins from the New Zealand Mint. Each new release in the collection features a different depiction of Mickey Mouse from one of the original feature films in the early- to mid-20th century when he made his debut to the world. Today, the 2017 ¼ oz Gold Niue Mickey Mouse Gallopin’ Gaucho Series Proof Coin is available to you online at Silver.com.

The Gallopin’ Gaucho Silver Proof Coin is part of the fifth release in the Mickey Through the Ages series. Each new design is released in a total of four weights and two different metals. These ¼ oz Gallopin’ Gaucho Gold Proofs are accompanied by matching designs on the 1/2 Gram and 1 oz gold proof coins, as well as the 1 oz silver coin.

Each of the 2017 1/4 oz Gold Niue Mickey Mouse Gallopin’ Gaucho Series Proof Coins in this listing ship to you inside of beautiful display boxes from the New Zealand Mint, complete with Mickey Through the Ages artwork on the colorful shippers. Included with your purchase is an individually numbered Certificate of Authenticity.

The reverse of all 2017 1/4 oz Gold Niue Mickey Mouse Gallopin’ Gaucho Proofs includes the image of Mickey Mouse as the gaucho in the film The Gallopin’ Gaucho. Mickey enters the film riding not upon a horse, but rather on a rhea and when he enters a local watering hole you’ll notice a wanted poster with Mickey’s face on it, implying he’s a bandit or outlaw.

On the obverse of the 2017 1/4 oz Gold Niue Mickey Mouse Gallopin’ Gaucho Series Proof coin features the right-profile portrait of Queen Elizabeth II. Created in 1998 by Ian Rank-Broadley, this is the fourth-generation depiction of Her Majesty since her ascension to the throne of England in 1952.

Please direct your questions to a Silver.com associate. Our team members are available at 888-989-7223, online through our live chat, and at our email address.