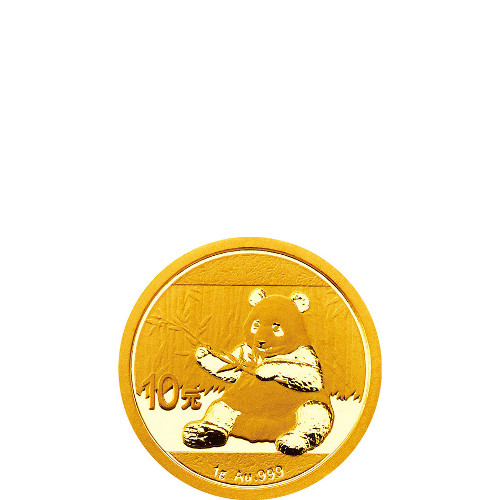 The Gold Chinese Panda coin was first introduced in 1982, and it has since become one of the most popular gold coin series in the world. These coins, which are minted by the Chinese Mint, are the official gold bullion coins of China. Each year, the Panda Coins are issued in a variety of sizes in both gold and silver. Now, you can get the 2017 1 Gram Gold Chinese Panda Coins at Silver.com.

In 2016, the Chinese Mint decided to make a change with all of its Chinese Panda Coins. Instead of being minted by weight in troy ounces, these coins are all in grams. The 1 gram piece is equal to the 1/20 oz coins from previous years. This change makes sense when you consider that China uses the metric system.

The obverse of each 2017 1 Gram Gold Chinese Panda Coin features the giant panda in stunning detail. The panda holds a bamboo branch in its paws, while it nibbles at the leaves. Since the design on the obverse side of the Panda Coins changes every year, this design won’t be seen on another issue of the coins.

On the reverse of each coin in this listing, an image of the Temple of Heaven is shown. The temple is located in south-central Beijing and is part of a much larger religious complex. The same image has been featured on the reverse of all previous issues of Panda Coins, as well.

Each of the coins in this listing are in Brilliant Uncirculated condition. This means that you will see no signs of wear and tear. You may, however, see minor flaws that include breaks in the luster, spotted surfaces and contact marks that were created during the coining process.

If you have any questions, please call Silver.com at 888-989-7223. You can also reach us online using our live chat and email features.