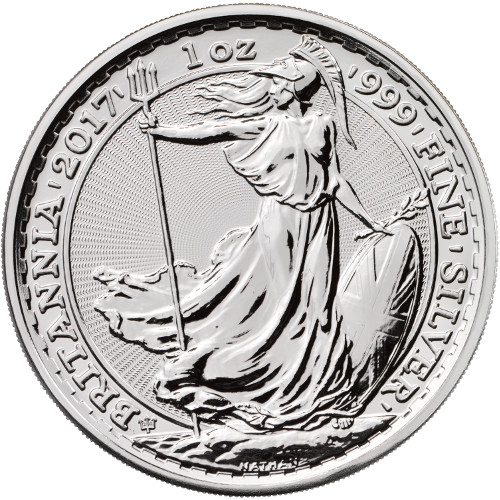 The term Britannia has been used in the Western world for more than two centuries now, referring to both the British Isles as a region under Roman control and the people of Britain themselves. Right now, the 2017 1 oz Silver British Britannia 20th Anniversary Coin is available to purchase online at Silver.com.

Each of the 2017 Silver British Britannia coins in this listing is in BU condition. Coins in this condition exhibit no signs of wear and tear, though you may notice a range of minor flaws including breaks in the luster, spotted surfaces, and contact marks from the coining process.

When the Roman Empire expanded beyond the borders of mainland Europe, the islands of the British Isles were among the first targets of the expanding Romans. As the islands fell under Roman control, the new province was referred to as Britannia. The name eventually carried dual meanings, simultaneously referring to the province, its people, and even a minor goddess responsible for its protection.

On the reverse of the Silver British Britannia Coin you’ll find the image of Britannia, complete with the 24-karat gilded gold layering. She stands tall and proud on England’s south coast, her Corinthian helmet prepares her for battle, while the trident in her right hand signifies control over the seas of the English Channel. In her left hand, a shield protects the islands and bears the Union Jack design of the nation’s flag.

The obverse of all 2017 Silver British Britannia Coins includes the latest portrait of Queen Elizabeth II. Created in July, 2015 by Jody Clark, this is the all-new fifth-generation portrait of the Queen to grace British coinage since her ascension to the throne in 1952. Clark, at just 33-years-old, was the youngest Royal Mint artist ever to create an effigy of the Queen.

Also included on the reverse side of the Silver Britannia this year is a small mint mark that celebrates the 20th anniversary of the silver coin. Located to the bottom-left, it is a trident head with a “2” and “0” between the spikes of the trident.

If you have questions about these silver coins for sale, please contact Silver.com at 888-989-7223. You can also contact us online using our live chat or email address.