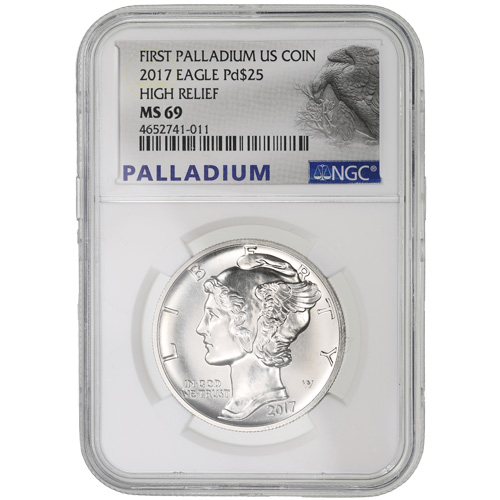 If you’re looking to expand your investment portfolio, there’s a brand new coin from the United States Mint that offers the perfect option. The all-new Palladium American Eagle debuted in 2017 and became the first major expansion in the series since 1997. Right now, 2017 1 oz Palladium American Eagle Coins are available to purchase online at Silver.com with NGC certification.

Each 2017 Palladium American Eagle coin available to you from Silver.com is in near-perfect condition. The NGC issues a grade of Mint State 69 to coins with full, original mint luster and a maximum of two minor detracting flaws. The flaws found on these coins are limited to minuscule contact marks and hairlines.

The Palladium Eagle, like others in the American Eagle collection, features an image of Liberty on the obverse side and the American bald eagle on the reverse. The Palladium Eagle is the first coin in the series with both designs coming from the same artist: Adolph A. Weinman. Both of Weinman’s designs are more than a century old, with Winged Liberty designed in 1916 and the bald eagle in 1907.

On the obverse of the 2017 Palladium American Eagle is Weinman’s left-profile portrait of Liberty. This is known as Winged Liberty and was designed by Weinman in 1916 for use on the 10-cent piece in American circulation. The image bears a strong resemblance to the Roman messenger god Mercury with a winged, Phrygian cap on her head.

The reverse of the Palladium American Eagle coin features the American bald eagle on a rocky cliff, clutching a branch in its talons. The engravings on either side of the coin include “Liberty,” the national motto, and the year of issue for the obverse and the coin’s weight, purity, metal content, and face value on the reverse.

All Palladium American Eagle coins are struck by the United States Mint at the West Point Mint facility, though as bullion coins they would never feature a mint mark.

If you have any questions for Silver.com, please don’t hesitate to contact us with questions. Our customer service team is available to you on the phone at 888-989-7223, online via our live chat, and through our email address. If you’re looking for the price of gold and silver, check our website!