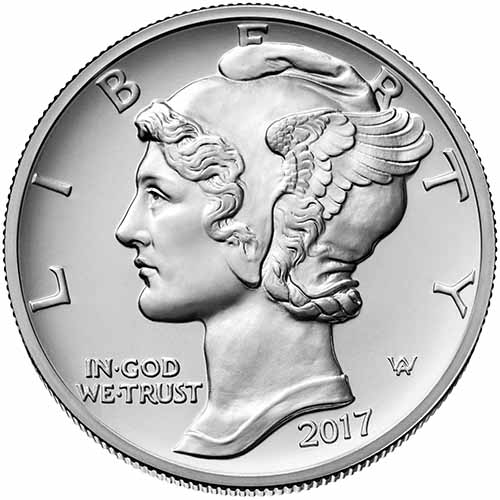 Silver Eagles and Gold Eagles are well-known among investors and collectors, as is the Platinum Eagle. These coins from the United States Mint are available in bullion, proof, and uncirculated versions, and they’re about to get some company in the form of the all-new Palladium American Eagle. Today, the 2017 1 oz Palladium American Eagle Coin is available to you online at Silver.com.

The Mercury Dime was created in 1916 by Weinman and in circulation until 1945. It is widely regarded as one of America’s finest coin designs and recently reappeared on the 2016 Gold Centennial collection. Liberty’s soft features appear on the obverse of the 2017 1 oz Palladium American Eagle in left-profile relief with “Liberty” above her head and “In God We Trust” at the lower-left of her bust.

On the reverse of the 2017 Palladium Eagle is a less-famous design from Weinman, but one that has been around even longer. His depiction of a bald eagle set upon a large branch clutching an olive branch, with wings spread wide, first appeared in 1907 on the American Institute of Architects medal.

The 2017 Palladium American Eagle coins in this listing have a BU condition. Coins in this condition show no signs of wear and tear, however, you may notice minor flaws including breaks in the luster, spotted surfaces, and contact marks from the production process at the mint.

Congress authorized the production of a Palladium American Eagle coin with the passage of the American Eagle Palladium Bullion Coin Act of 2010, setting the stage for a bullion, uncirculated, and proof version of the coin to be struck. The act did not, however, jump-start production as the Treasury Secretary was given discretion to push the program forward.

Please don’t hesitate to reach out to us with questions. You can contact Silver.com at 888-989-7223, chat with us live online, or simply send us an email. Don’t forget to visit our homepage to find the price of gold and silver!