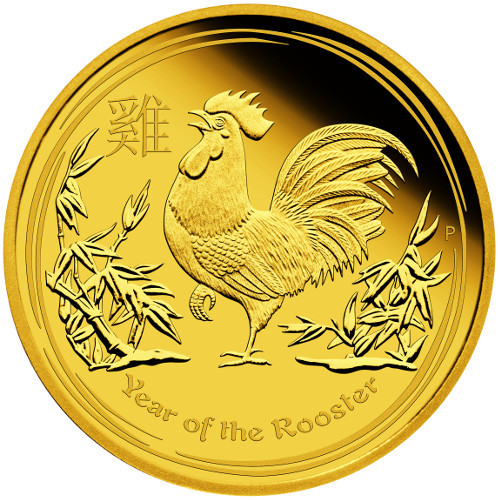 With any given coin release, the 1 oz weight is often the most popular, even when smaller fractional weights are available. For the Lunar Series II coin program of the Perth Mint, 1 oz. coins remain one of the most popular options for investors and collectors alike. Today, the 2017 1 oz Proof Gold Australian Rooster Coin is available to purchase on Silver.com.

Each new coin release in the Lunar Series II program comes with a different design. Although the Perth Mint has already successfully run through an entire Lunar Series I (1996-2007) program, new designs were created for each of the animals in the 12-year cycle of the Zodiac.

Chinese Lunar Calendar animals represent common traits and characteristics of the individuals born under a particular year. For example, those born in the Year of the Rooster are said to be honest, loyal, hardworking, and sociable, not unlike a rooster in many cases.

The reverse of all 2017 1 oz Proof Gold Australian Rooster Coins includes the design specifically created for the gold versions of the coin. In it you’ll see a single rooster in the center, surrounded by engravings that read “Year of the Rooster,” “P” for the Perth Mint, and the Chinese symbol for rooster.

All coins from the 2017 Proof Gold Australian Rooster collection ship inside of black Perth Mint display boxes that feature an oval shape and a timber-themed lid. These coins arrive with a Certificate of Authenticity, and ship together inside of a Lunar Series II-themed shipper with full-color Year of the Rooster artwork.

The Perth Mint opened in 1899 as the final of three British Royal Mint facilities in Australia. After Australian federation, the Royal Mint locations began to close. First the Sydney Mint, then the Melbourne Mint, leaving Perth as the oldest. The Currency Act of 1965 established the sovereign mint in Canberra at the Royal Australian Mint, and granted legal tender status to Perth Mint coins.

Please contact Silver.com with any questions. You can reach our customer service associates at 888-989-7223, connect with us online using our live chat, or email us directly.