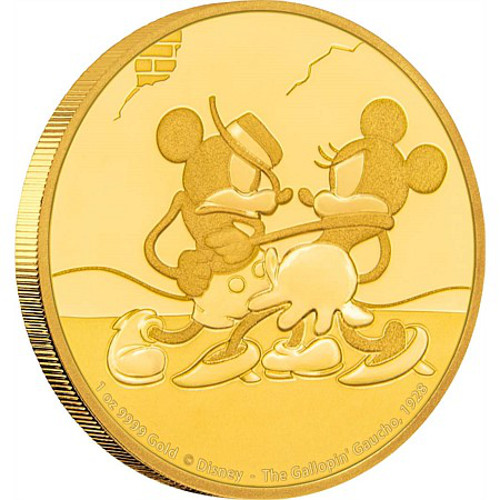 The Mickey Mouse Through the Ages collection from the New Zealand Mint moves on in 2017 with the release of a brand-new design honoring the second-ever film to feature Mickey Mouse. Released in 1928, The Gallopin’ Gaucho was a playful take on a real-life film entitled The Gaucho. The 2017 1 oz Gold Niue Mickey Mouse Gallopin’ Gaucho Series Proof Coin is now available to you online at Silver.com.

In The Gallopin’ Gaucho, Mickey plays the role of a cowboy from the plains of Argentina. The six-minute animated short is based upon Douglas Fairbanks’ The Gaucho, which took place in the Pampas of Argentina, and depicts the cowboy life of South America’s famed gauchos.

On the obverse of all 2017 1 oz Gold Niue Mickey Mouse Gallopin’ Gaucho Series Proof coins includes the right-profile portrait of Queen Elizabeth II. A 1998 creation from Ian Rank-Broadley, this design marks the fourth-generation depiction of Her Majesty, who has appeared on the obverse of all British and commonwealth coins since 1952.

The reverse of the 2017 1 oz Gold Niue Mickey Mouse Gallopin’ Gaucho Series Proofs feature the image of that lovable mouse as a gaucho. Walt Disney co-directed the film with Ub Iwerks, and was solely in charge of production. Iwerks not only co-directed, but also handled all of the animation for the film.

Each 2017 1 oz Gold Niue Mickey Mouse Gallopin’ Gaucho Series Proof Coin ships inside of a beautiful New Zealand Mint display box, which is packed inside of a themed shipper sleeve that features colorful artwork from The Gallopin’ Gaucho. You’ll also receive a numbered Certificate of Authenticity to go along with the coin.

New Zealand Mint is a privately owned and operated mint located in the city of Auckland. Though it has the sound of a sovereign mint, it has no dealings with the federal government on New Zealand currency, which is struck overseas.

We encourage Silver.com customers to ask questions when necessary. Our customer service team is available at 888-989-7223, online via our live chat, or at our email address.