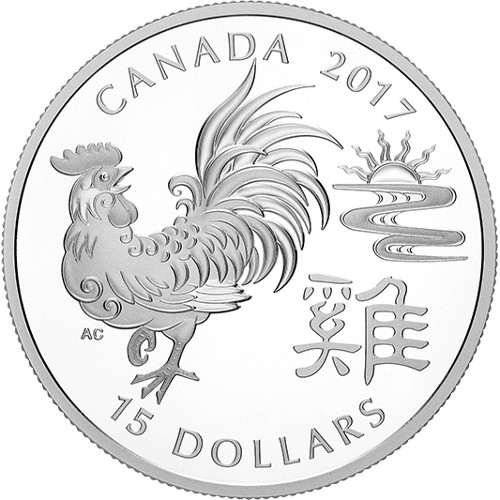 Coins depicted the animals from the Chinese Lunar Calendar have been growing increasingly popular over the last few years. With each annual release of the coins featuring a different animal, these coins can be a fun way to grow an interesting collection. This year’s release is the rooster. Now, you can get the 2017 1 oz Proof Silver Canadian Year of the Rooster Coin at Silver.com.

The animal representing 2017 on the Chinese Lunar Calendar is the rooster. For the rooster design, the Royal Canadian Mint hired Canadian artist Aries Cheung to depict the rooster on the reverse of these coins. The rooster image is highly stylized, but you can still see the confidence that the rooster displays. You can also see the rising sun in the background over a winding river.

On the obverse of each coin, you will see the right-profile image of Queen Elizabeth II. The image, designed by Susanna Blunt, was created in 2003 and has been used on all modern Canadian coinage since 2004. Surrounding the portrait, you can see the engravings of the Queen’s name and “D.G. Regina.”

All of the coins in this listing will ship in a satin-like display box with a red shipping sleeve. All Zodiac lovers won’t want to miss out on these great coins, which are in proof condition.

This is the eighth year that the Royal Canadian Mint has produced Lunar-themed coins. The rooster is known to be witty, confident and a lover of attention. Anyone born in the Year of the Rooster is said to have these traits, as well.