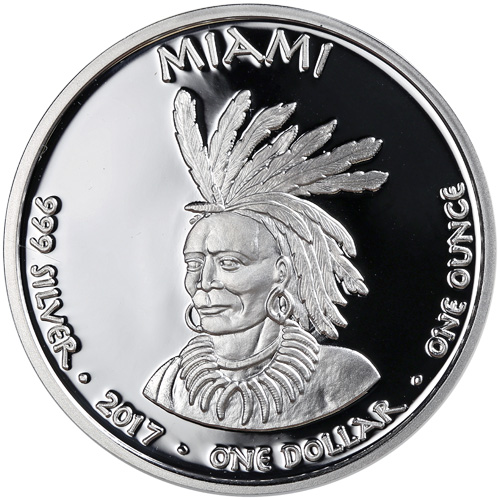 The 2017 release of Native Dollars from the Native American Mint gets underway with the debut of the Indiana Miami Mink silver coin. With a distinctly tribal flair to the artistry and design of these coins, this 8th release in the series continues the brilliant design theme for those collectors looking for something new in their personal catalog. Today, the 2017 1 oz Proof Silver Indiana Miami Mink Coin is available to you online at Silver.com.

The federal government of the United States of America recognizes the Miami Tribe of Oklahoma as the only federally recognized Native American tribe of Miami Indians in the United States today. There is also a Miami Nation of Indiana, but they exist at this point as an unrecognized tribe.

Speaking one of the Algonquian languages originally, the Miami Indians were known as the Great Lakes tribe for hundreds of years. Today, their numbers have dwindled to about 3,908 living primarily in the state of Oklahoma, where most of the tribe was resettled in 1846.

On the reverse of the 2017 1 oz Proof Silver Indian Miami Mink Coin you’ll find the image of a small mink. Engravings identify the state represented in this release in the Native Dollars Series, as well as the animal representative of that state.

The obverse of all 2017 1 oz Proof Silver Indiana Miami Mink Coins you’ll find the image of a Miami tribal member. The Miami people inhabited large sections of the southern Great Lakes until 1846, at which point in time most had been resettled forcibly to the Indian Territory, which is now modern-day Oklahoma.

Native American Mint Native Dollars coins have a face value of 1 Dollar, but as the United States Mint is the only American mint with the authority to strike legal tender coins, there is no official face value to these coins.

Please feel free to reach out to Silver.com if you have any questions. Our team members are available on the phone at 888-989-7223, online using our live chat, or via our email address. Don’t forget to check out our website, where you can view a silver prices chart as well as our full catalog of silver products!