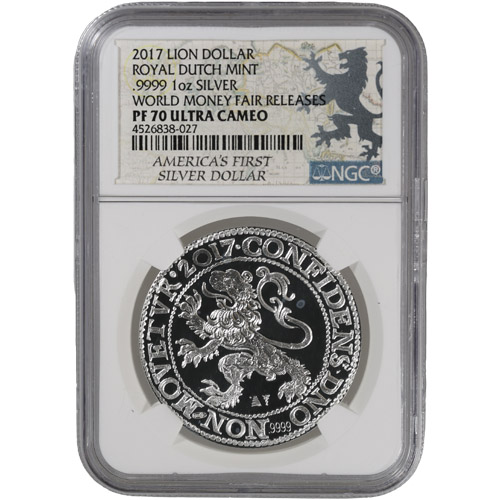 Coins can show us a lot about our past. The Royal Dutch Mint has decided to honor one of its historic coins by restriking the designs for the 400th anniversary of the first of the Dutch lion daalder coins. Today, you can purchase the 2017 1 oz Proof Netherlands Silver Lion Dollar Coin from Silver.com in PF70 UCAM condition.

When you purchase coins from this listing, they will come in a plastic slab from the Numismatic Guaranty Corporation (NGC). These slabs provide key information about the coins and protect them from damage. These coins were given a PF70 grade, meaning they will be in perfect condition. These coins have also been given a UCAM, or Ultra Cameo, designation. This means that the designs are heavily frosted, while the background is deeply-mirrored to give exceptional contrast.

These coins mark the 400th anniversary of the first release of the Dutch lion daalder, which was originally released in 1617. These restrikes are named Lion Dollars in honor of the lion designs found on the coins.

The obverse face shows the image of a knight standing next to his shield. The shield features the image of a rampant lion standing on its two hind legs. Engravings on this side of the coin include “MO. ARG. PRO. CONFOE. BELG,” short for “Moneta Argentea Provinciarum Confoederatum Belgicarum.” This phrase means “Silver money of the Province of the Netherlands.” The letters “TRA” represent Utrecht.

The heraldic lion is featured on the reverse of these coins. The image is the same as the one found on the shield on the obverse of the coin. A beadwork pattern surrounds the lion and the entire design of the coin. Engravings include “2017” and the motto of the United Provinces “CONFIDENS. DNO. NON. MOVETVR,” meaning “Who trusts in the Lord is not moved.”

The Royal Dutch Mint opened in 1567 under the Dutch state. It has been producing coins for more than 450 years. The mint was purchased by the Heylen Group in 2016. Today, the mint makes coins for various foreign national banks in the Eurozone and countries like Latvia, Honduras, and Guatemala.

Please direct all questions when buying silver to our customer service team. They are happy to assist you at any point during the ordering process. You can reach us via live chat, email, and phone at 888-989-7223.