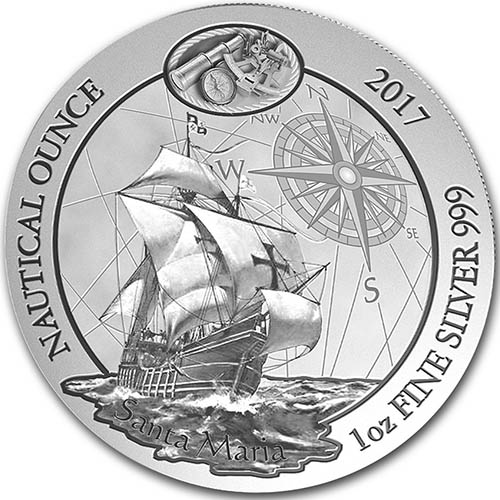 In 1492, Christopher Columbus set off across the Atlantic Ocean to explore the new world in a three-ship sailing party. His ships went down in history as the Nina, Pinta, and the Santa Maria. The latter of the three was the slowest ship in the group, but nonetheless served as the flagship of the expedition. Today, the 2017 1 oz Silver Rwandan Santa Maria Nautical Ounce Coin is available to you online at Silver.com.

Named the La Santa Maria de la Immaculada Concepcion, the Santa Maria was the largest of the three ships used by Columbus during his voyage across the ocean. Translated into English, the ship’s name is The Holy Mary of the Immaculate Conception, but was commonly referred to simply as the Santa Maria.

Each 2017 1 oz Silver Rwandan Santa Maria Nautical Ounce Coin listed here is in BU condition. Coins in this condition have no signs of wear and tear, but can feature minor flaws from the production process. These flaws include breaks in the luster, spotted surfaces, and contact marks.

The obverse of the 2017 1 oz Silver Rwandan Santa Maria Nautical Ounce Coin includes an image of the Santa Maria at sail on the high seas. Other images include a compass in the upper-right field and navigational tools at the top of the design field. Though the Santa Maria made the voyage across the ocean, it was shipwrecked on a sandbank on the return voyage on December 25, 1492 off the coast of modern-day Cap-Haitien, Haiti.

Please don’t hesitate to contact Silver.com with questions about these 1 oz silver coins. You can reach us on the phone at 888-989-7223, on the web using our live chat, and via our email address.