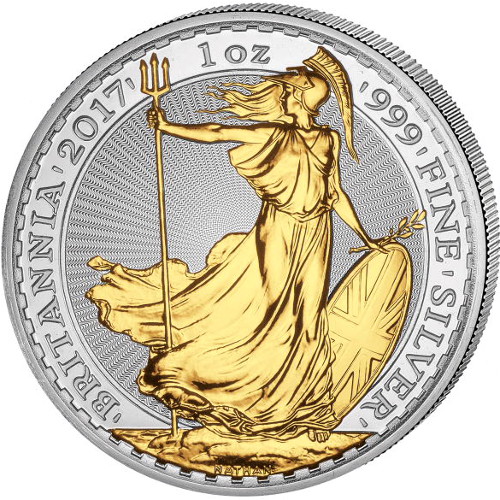 The official bullion coin of the United Kingdom bears imagery rooted deep in the history of the British Isles, and one which represents the strength and determination of its people. Available since 1997, the Silver British Britannia coin is the most beautiful design on a British coin available to date. Right now, the 2017 Silver British Britannia Coin is available to purchase online at Silver.com.

Each of the 2017 Silver British Britannia Coins in this product listing is in BU condition. Coins in BU condition exhibit no signs of wear and tear, though you may notice a range of minor flaws including breaks in the luster, spotted surfaces, or contact marks from the coining process.

When the Roman Empire expanded beyond the borders of mainland Europe, the islands of the British Isles were among the first targets of the expanding Romans. As the islands fell under Roman control, the new province was referred to as Britannia. The name eventually carried dual meanings, simultaneously referring to the province, its people, and even a minor goddess responsible for its protection.

These 2017 Silver British Britannia Coins have a stunning 24-karat gold layering applied to the surfaces. Known as a gilded coin, this layering adds collectible beauty to the coin and is applied only to the images of Britannia found on the coin’s reverse face.

On the reverse of the Silver British Britannia Coin you’ll find the image of Britannia, complete with the 24-karat gilded gold layering. She stands tall and proud on England’s south coast, her Corinthian helmet prepares her for battle, while the trident in her right hand signifies control over the seas of the English Channel. In her left hand, a shield protects the islands and bears the Union Jack design of the nation’s flag.

The obverse of all 2017 Silver British Britannia Coins includes the latest portrait of Queen Elizabeth II. Created in July, 2015 by Jody Clark, this is the all-new fifth-generation portrait of the Queen to grace British coinage since her ascension to the throne in 1952. Clark, at just 33-years-old, was the youngest Royal Mint artist ever to create an effigy of the Queen.

These 2017 Silver British Britannia Gilded Coins are original products of the Royal Mint, and are offered with the gilded finish courtesy of Emporium Hamburg. The latter is a third-party authorized coin dealer in Germany.