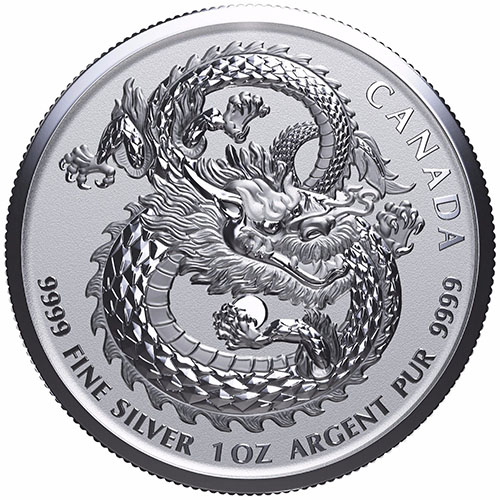 There are many symbols in Chinese culture that have an imperative meaning to the people of China. From the dragon and its image as a powerful being to the figure eight and its association with luck, there are various interpretations for designs in East Asian culture. The dragon and the figure eight come together in one beautiful design on the reverse of the new 2017 1 oz Silver Canadian Lucky Dragon High Relief Coin, available to you online today at Silver.com.

The dragon is a central figure in the mythology and lore of Chinese culture. Ancient Chinese society associated the dragon with potent and auspicious powers that included control over water, rainfall, typhoons, and floods. The dragon was adopted by emperors as a symbol of power and strength.

In common society, the dragon was also a symbol of good luck for those people deemed worthy of such an association. In this design from Simon Ng, the luck of the dragon comes together with a traditionally lucky number to the people of China: 8. The dragon is combined on the reverse of the coin with a figure-eight depiction.

All of the 2017 1 oz Silver Canadian Lucky Dragon High Relief Coin available here is in BU condition and packaged inside of protective plastic. Each silver coin is a high-relief strike, indicating a high-pressure strike that results in slightly concave obverse and reverse sides that enable the design elements to pop in 3D fashion.

The obverse of the Silver Canadian Lucky Dragon High Relief Coin includes the image of Queen Elizabeth II. The longest-reigning monarch in British history, this is the fourth-generation design on Canadian coinage created in 2003 by Susanna Blunt.

On the reverse of the 2017 1 oz silver Canadian Lucky Dragon High Relief coin is a double symbol of luck. Ng developed the image of a dragon in a figure-eight shape with intricate details on the scales of the dragon. The number eight is considered a symbol of luck, wealth, and prosperity.

Please feel free to reach out to Silver.com if you have questions. You can call our customer service team at 888-989-7223, chat with our team online through our live chat, or simply send us an email.