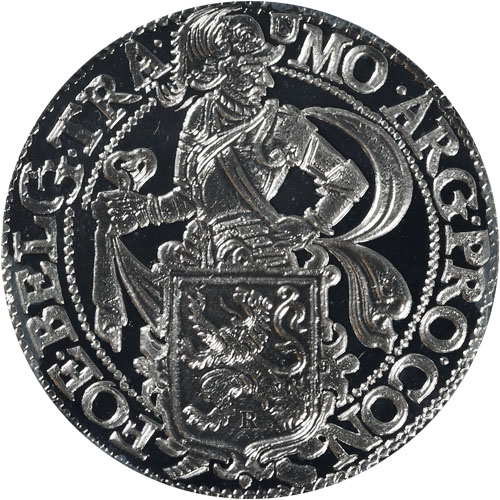 Historic coins are always incredible to find. However, coins from the 1600s are hard to find. The Royal Dutch Mint is honoring one of its historic coins with the 2017 1 oz Silver Netherlands Lion Dollar Restrikes, which are a reproduction of the Dutch daalder that first came out in 1617. Right now, you can purchase the 400th-anniversary restrike version of the Dutch daalder from Silver.com.

When you purchase a coin from this listing, you will receive a capsule and display box to protect your investment. Additionally, each coin comes with a Certificate of Authenticity to verify that it is a legitimate production of the coin from the Royal Dutch Mint.

These coins were struck as reproductions of the Dutch daalder, which was originally created in 1617, making these 400th-anniversary editions of the iconic designs. Today, we call these restrikes Lion Dollars due to the amazing lion designs on both the obverse and reverse faces of the coins.

A knight standing near his shield can be seen on the obverse face of these coins. The shield features the image of a lion in what is called the rampant position. You will also find the inscriptions “MO. ARG. PRO. CONFOE. BELG,” which is short for “Moneta Argentea Provinciarum Confoederatum Belgicarum,” meaning “Silver money of the Province of the Netherlands.” You will also find the letters “TRA,” which represent Utrecht. A delicate beadwork design surrounds the main imagery.

On the reverse, you will find the same heraldic lion design that is found on the shield on the obverse side of the coin. The large lion is shown standing on just its hind legs. A beadwork pattern encircles the image of the lion, separating it from the engravings “2017” and the motto of the United Provinces, which is “CONFIDENS. DNO. NON. MOVETVR,” meaning “Who trusts in the Lord is not moved.”

Established in 1567, the Royal Dutch Mint was owned by the Dutch state until 2016. In 2016, Heylen Group purchased the mint. Today, the mint makes coins for numerous foreign national banks that are part of the Eurozone. The mint also produces coins for Honduras, Latvia, and Guatemala.

Please direct all questions about silver for sale to our customer service team. They are happy to assist you at any point during the ordering process. You can reach us via live chat, email, and phone at 888-989-7223.