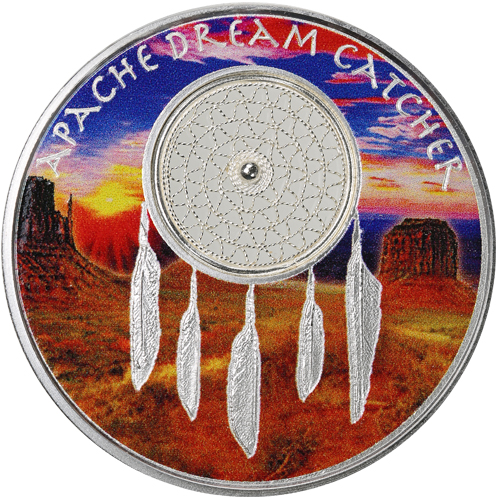 The use of the dream catcher by other tribal nations occurred slowly at first, spreading from Ojibwe territories to other tribes through intermarriage and trade. It wasn’t until the 1960s and 1970s that the Pan-Indian Movement spread it to all tribes, where today it stands as a symbol of unity and identification among Native American and First Nation tribes in North America.

On the reverse of all 2017 1 oz Silver Niue Apache Dream Catcher Coins is the image of a dream catcher, with a woven inset in the coin’s design on a beautifully colorized background field. The hues of red, orange and yellow paint the scene of a desert sunset in the American Southwest, where the Apache tribes have long occupied stretches of New Mexico, Arizona, Texas, Colorado, Oklahoma, and parts of three states in Mexico.

The obverse of the 2017 1 oz Silver Niue Apache Dream Catcher Coin includes the right-profile portrait of Queen Elizabeth II. Created in 1998 by Ian Rank-Broadley, this image is the fourth-generation depiction of the Queen since she ascended to the throne in 1952. She is the longest reigning monarch now in British history.

All 2017 1 oz Silver Niue Apache Dream Catcher Coins are available to you inside of protective display boxes, which house your coin for safety and protect it from damage. With your purchase you also receive a numbered Certificate of Authenticity to validate the content and quality of your coin.

Please direct your questions to a Silver.com associate. Our customer service team is available at 888-989-7223, online using our live chat, and via our email address.