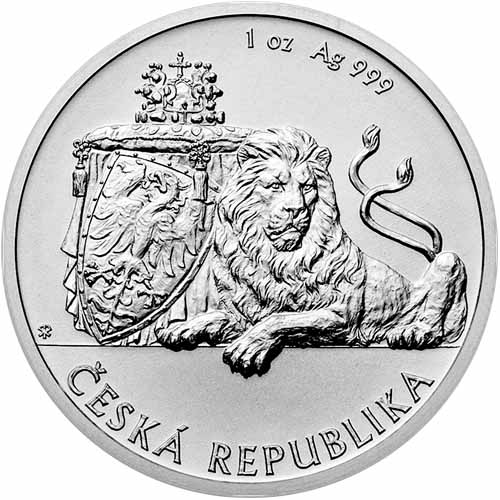 Investors look to buy silver in the modern era have a lot of options in front of them. From 1 oz silver coins to silver bars weighing upwards of 100 Troy oz, there’s no shortage of options. Now, another new coin has come to market that sees the first-ever silver bullion coin from the Czech Mint in the Czech Republic. Today, 2017 1 oz Silver Niue Czech Lion Coins are available to you online at Silver.com.

The Czech coat of arms features two different creatures in two differing poses on its four-squared shield. In the upper-left and lower-right quadrants you’ll find the image of a two-tailed lion in the heraldic design.

It is the Czech Lion that was chosen as the debutant on the Czech Nationhood series, a new program of silver coins offered by the Czech Mint to celebrate the heraldic beasts and symbolism of the Czech Republic. The modern coat of arms was adopted fairly recently in 1992, but the imagery within dates back into the historic culture of the Czech people.

All 2017 1 oz Silver Niue Czech Lion Coins are available in BU condition. Coins in this condition have no signs of wear and tear, though you may notice minor flaws in the finish resulting from the production process. These include possible breaks in the luster, spotted surfaces, and contact marks.

On the reverse of the Silver Niue Czech Lion Coin is the image of a massive lion, the beast laying down with its split two tails in the background. Engravings on this face of the coin include the weight, purity, and metal content of the coin, as well as the phrase “Ceska Republika” and the shield with a burning eagle.

The obverse of all 2017 1 oz Silver Niue Czech Lion Coins bears Queen Elizabeth II’s effigy. As a Niue-issued coin, these coins feature the monarch’s portrait as do all other commonwealth coins. The image included here is the fourth-generation design created in 1998 by Ian Rank-Broadley.

Founded in 1993, the Czech Mint is the official sovereign mint of the Czech Republic and strikes both circulation coinage, as well as commemorative medals. This is the mint’s first foray into bullion coining.

Please don’t hesitate to call Silver.com customer service at 888-989-7223 with questions. You can also reach out to us online using our live chat and email address.