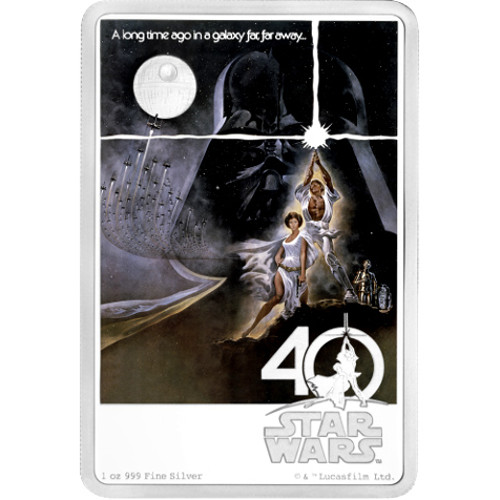 Few movies have had the type of cinematic and cultural impact that the Star Wars franchise has enjoyed over the last 40 years. Featuring a total of 8 feature films and rising, Star Wars captivated imaginations and broke new ground in cinematography. The 2017 1 oz Silver Niue Star Wars 40th Anniversary Rectangular Coin is now available to you online at Silver.com.

Fans of Star Wars are more than familiar with the storyline of the franchise. In the original film you meet the main protagonists in the film, and follow the story of Luke Skywalker as he is thrust into the battle between the Rebel Alliance and the Empire. Skywalker is brought in by Obi-Wan Kenobi, and eventually is part of a team of unlikely allies trying to save Princess Leia from the Empire.

On the obverse of each Star Wars 40th Anniversary Coin you’ll find the familiar right-profile portrait of Queen Elizabeth II. Her Majesty’s effigy is featured on the obverse of all British and commonwealth coins, with this particular image from Ian Rank-Broadley created in 1998 as the fourth-generation depiction of the Queen.

The reverse of the 2017 1 oz Niue Silver Star Wars 40th Anniversary Rectangular Coin includes a brilliant combination of proof colorization and silver engraving. It features images of the film’s main protagonists, along with an engraving of “A long time ago in a galaxy far, far away.” Each coin has a unique rectangular shape that is sure to add value to your existing silver coin collection.

Each of the 2017 1 oz Niue Silver Star Wars 40th Anniversary Coin ships inside of a clear, Perspex holder with a frame designed to allow for easy display. The Certificate of Authenticity is included inside of the packaging, and all items feature stylized and branded imagery for the 40th anniversary.

New Zealand Mint is a private minting facility located in Auckland, New Zealand. The only private mint in the nation, it is not affiliated with the federal government of the country, which gets sovereign coinage and paper currency produced by the Royal Mint and Royal Canadian Mint.

We encourage Silver.com customers to call us at 888-989-7223 with questions. You can also connect with us online through our live chat and email address. Additionally, you can browse our full catalog of silver for sale on our website.