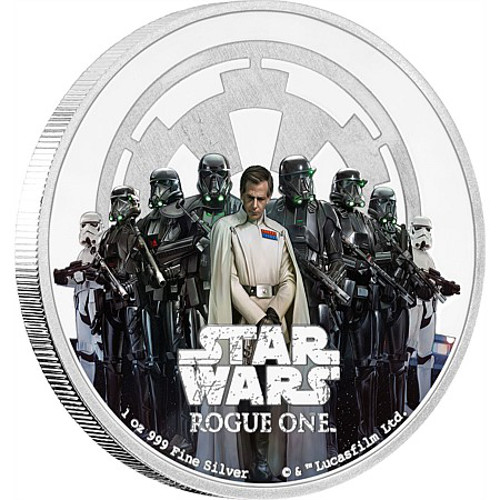 There are few forces on Earth known to man more evil than the fictional Empire of the Star Wars film franchise. Often viewed in the original films as a literal interpretation of US interventionism overseas during the Vietnam War era, today’s Empire is being introduced to a new generation of Star Wars fans through the upcoming Rogue One release. Today, the 2017 1 oz Silver Niue Star Wars Rogue One The Empire Proof is available online at Silver.com.

The New Zealand Mint has been celebrating the rebirth of Star Wars on the big screen in recent months. Throughout 2016 the mint struck and released coins in a Star Wars Classic and Star Wars The Force Awakens series, both featuring images from the original trilogy and the first of a new trilogy arriving in theaters starting in 2016.

Star Wars: Rogue One is an all-new film that marks a serious first-ever occurrence in the Star Wars franchise. This film is a standalone feature film not part of the new sequel trilogy that helps connect the storylines from the end of the prequel trilogy of the early 21st century and the beginning of the original films of the trilogy. In Rogue One, a rogue group of Rebellion members set out to steal the Empire’s plans for a new Death Star.

On the reverse side of the coin you’ll find a colorized design mixed brilliantly with the coin’s natural silver finish. The 2017 1 oz. Silver Niue Star Wars Rogue One The Empire Proof Coin features the image of Director Orson Krennic standing in front of a group of the Empire’s most loyal Deathtroopers and Stormtroopers.

The obverse side of each Star Wars Rogue One coin includes the right-profile portrait of Queen Elizabeth II. The British monarch appears on the obverse of all commonwealth coins, and has since ascending to the throne in 1952. This depiction was created in 1998 by Ian Rank-Broadley as the fourth-generation effigy of the Queen.

The New Zealand Mint is located in Auckland, New Zealand. Though it is the nation’s only mint, it does not have status as the sovereign mint. All New Zealand dollars and coinage are struck overseas at the Royal Canadian Mint and Royal Mint.

Please direct your questions to a Silver.com associate at 888-989-7223, or connect with us online using our live chat and email features.