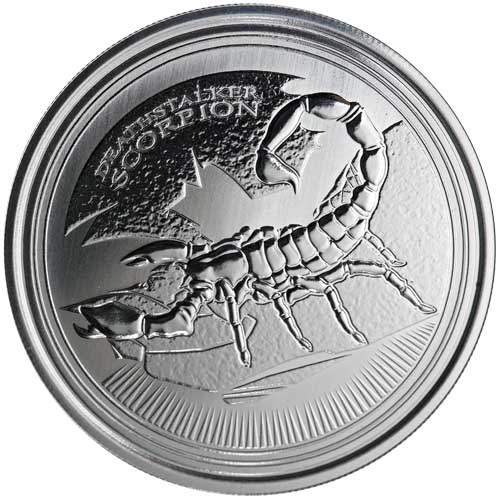 Few creatures in this world are more terrifying than the scorpion. Small, agile, and easy to miss, these creatures can possess the toxic venom strong enough to take down a human being, though it is often only used to subdue their prey. The Deathstalker Scorpion is the haunting new design for a Republic of Chad issued coin from the Scottsdale Mint. Today, the 2017 1 oz Silver Republic of Chad Deathstalker Scorpion Coin is available to you online at Silver.com.

The Republic of Chad is a landlocked nation in central Africa that was conquered in whole by the French in the 1920s. For roughly 50 years it was part of the colonial zone of French control known as French Equatorial Africa, and would not gain independence until 1960.

All 2017 Silver Republic of Chad Deathstalker Scorpion Coins are in BU condition. Coins in this condition have no signs of wear and tear, though they may feature flaws. These minor flaws are limited to breaks in the luster, spotted surfaces, or contact marks and result from the production process at the mint.

The reverse of all Republic of Chad coins in this listing include the coat of arms for Chad, which features a central triangular-shaped shield with a sunburst crown atop it. There is a lion to the right and goat to the left, with a ribbon underneath bearing the national motto of “Unite, Travail, Progres.” This phrase is French for “Unity, Work, Progress.”

On the obverse of the 2017 1 oz Silver Republic of Chad Deathstalker Scorpion Coin is the image of the feared arachnid. Deathstalkers are true to their name, hiding in dark crevices to await their passing prey. When prey gets within reach, the pincers of the scorpion capture and hold the victim in place while its barbed tail injects paralyzing venom.

Please don’t hesitate to reach out to Silver.com with questions regarding these silver coins. You can call us at 888-989-7223, chat with us live online, or simply send us an email with your questions.