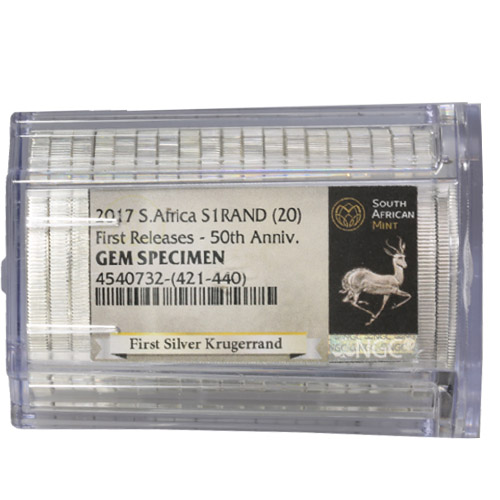 The South African Mint first introduced the Krugerrand bullion coins in 1967. Originally, the coins featured just a 1 oz gold option and didn’t expand to include fractional-ounce coins until 1980. It would be another 37 years until a major addition was made to the series, and this time it would result in the release of the first-ever 1 oz silver coin in the Krugerrand collection. Today, 2017 1 oz Silver South African Krugerrands in NGC Gem Rolls are available to you online at Silver.com.

2017 marked the 50th anniversary of the South African Krugerrands, the first coin program to reach this milestone. As part of that celebration, the South African Mint and Rand Refinery introduced some first-ever options in the series. These included a Platinum Krugerrand, 1/50 oz Gold Krugerrand, and a Silver Krugerrand. The latter was the only coin to enter annual production and remain around after 2017.

All of the 2017 1 oz Silver South African Krugerrands in these NGC Gem Rolls are Premium Uncirculated specimens. The NGC housed the coins inside of Gem Rolls, advanced rolls that have ultrasonically sealed labels within and sturdier materials that ensure long-term preservation and protection of your coins. Inside each of the Gem Rolls, you will find 20 individual 2017 Silver Krugerrands, each one with 1 Troy ounce of .999 fine silver.

On the obverse side of 2017 Silver South African Krugerrands is a depiction of Paul Kruger. The former President of the South African Republic, Kruger’s first portrait debuted on South African Pound gold coins in 1890 and is the same shown here on the obverse of the Silver Krugerrand. This version of the bust was modernized in 1984.

The reverse face of the 2017 1 oz Silver South African Krugerrands includes the national emblem of the modern Republic of South Africa. The Springbok antelope commonly roams the savannas of southern Africa, including within the boundaries of the nation of South Africa. This design was also last modernized in 1984.