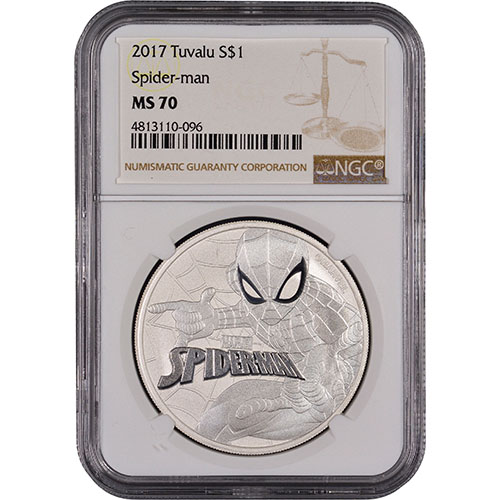 Marvel Series silver bullion coins from Perth Mint are ideal collectible coins or gifts for those who are fans of the Marvel Comics and Marvel Comics Universe. Peter Parker became the first teenage character to step into the shoes of a superhero when the high school student from Queens, New York was bitten by a spider and blessed with powers to combat evil. The 2017 1 oz Silver Tuvalu Spiderman Marvel Series Coin is available to you right now online at Silver.com in perfect condition.

Following the death of his parents in a plane crash, Peter Parker lived with and was raised by his Aunt May and Uncle Ben in New York City. As part of his origin story, Spiderman has tragedy in his background like so many other Marvel Comic heroes. When he first develops his powers, he originally seeks to use them for stardom.

However, after letting a burglar escape who was responsible for shooting and killing his uncle, Peter Parker seeks to use his powers responsibly. Spiderman is the featured in countless comic series from Marvel, but the first and longest-lasting of those series is known as The Amazing Spider-Man.

On the reverse of the 2017 1 oz Silver Tuvalu Spiderman Marvel Series Coins you’ll find the image of Spiderman. Created by Stan Lee and Steve Ditko, Spiderman is shown here in his superhero suit that obscures his face and features his hands ready to sling some web. The background field has a web design as an homage to the web-slinger.

The obverse of all Silver Tuvalu Spiderman Marvel Series Coins features the effigy of Queen Elizabeth II. Captured in right-profile relief, this is the fourth-generation design of Her Majesty to appear on British and commonwealth coins. It was created in 1998 at the Royal Mint by Ian Rank-Broadley.

We encourage Silver.com customers to call us with questions at 888-989-7223. You can contact us online as well through our live chat and email services.