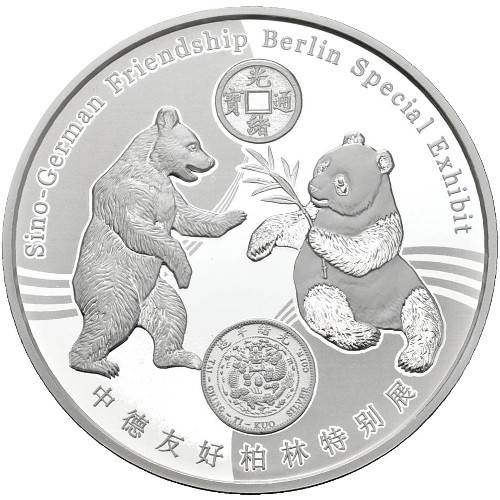 One of the most popular and longest running coin series in the world is the Silver Chinese Panda. The official bullion coin of the People’s Republic of China, these coins have gained increasing attention from numismatists around the world in recent years as China’s economy opens up more and more to the rest of the world. The 2017 1 oz World Money Fair Silver Commemorative Panda Round is a unique entry in this collection that debuted at WMF 2017 and is available to you now online at Silver.com.

The Silver Chinese Panda coin is known around the globe for the new images of the Panda on the obverse side of the coin each year. Only once, in 2001-2002, has the design ever been repeated. And never before has the Panda been accompanied by another type of bear in the Silver Panda coin series.

Today though, the 2017 1 oz World Money Fair Silver Commemorative Panda Round brings an all-new design to the Silver Panda collection with a big first in the silver coin series. For the first time every, the Silver Panda series has a second bear on the design. The so-called “Berlin bear,” from the Coat of Arms of Berlin, is featured on the obverse facing the panda.

On the reverse of each round is the image of two bears, one of them a panda, and set of three replicated coin dies. These dies and letter punches were created by German-based Otto Beh Company for the creation of Chinese coins between 1897 and 1898.

Since 1984, the Chinese Mint has struck and released low-mintage silver rounds commemorating the annual coin shows that take place around the world. These shows often attract thousands of numismatists, and serve not only as a place for coin lovers to gather and share collections, but for mints to debut some of the latest coin designs coming to market.

We encourage all Silver.com shoppers to contact us with questions. You can reach our customer service team at 888-989-7223, connect with us online using our live chat, or email us directly.