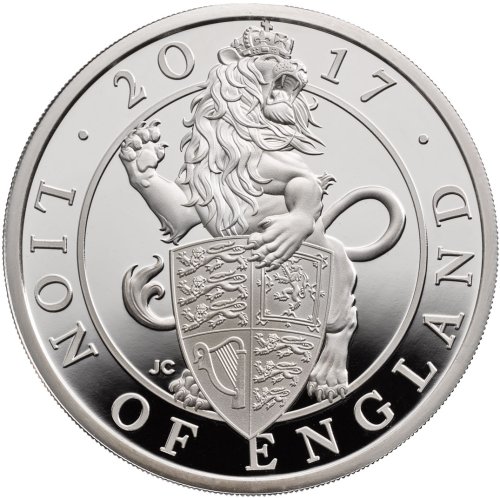 With the release of the Lion of England design in 2016, the Royal Mint embarked on an ambitious 10-coin series of gold and silver coins marking the record-breaking reign of Queen Elizabeth II of England. The coins debuted that year in a bullion version, and in 2017 the proof version of these stunning designs have arrived. Today, the 2017 10 oz Proof Silver British Queen’s Beast Lion Coin is available to you online at Silver.com.

The Queen’s Beast Series of gold and silver coins for sale from the Royal Mint features both bullion and proof versions. The bullion coins were made available first, with 1 oz gold and ¼ oz gold options, as well as the mint’s first-ever 2 oz silver bullion coin. For the proof series, larger weight silver coins are the focus, with a 5 oz and 1 Kilo coin available in addition to this 2017 10 oz Proof Silver British Queen’s Beast Lion coin.

Each Proof Silver British Queen’s Beast Lion coin is manufactured in a unique process that lends distinguished sharpness to the details of the design and a mirror-like finish to the background field. These coins are struck on special-made planchets with polished dies for striking.

Your 2017 Proof Silver British Queen’s Beast coin arrives individually encapsulated and is set within a black display box courtesy of the Royal Mint. Each coin includes an individually numbered Certificate of Authenticity as well as a booklet produced with the Richmond Herald of the College of Arms.

On the reverse of the 2017 10 oz Proof Silver British Queen’s Beast Lion Coin you’ll find the Lion of England design. Created by Jody Clark, it features the heraldic shield of Britain in the foreground with a massive depiction of the lion standing behind it with a crown on its head and one paw raised to strike at attackers.

The obverse of all Proof British Queen’s Beast Coins includes Her Majesty Queen Elizabeth II’s effigy. This right-profile portrait was created by Jody Clark in 2015 as the fifth-generation image of the Queen for use on British coinage.

Please don’t hesitate to ask questions. Silver.com customer service is available to you on the phone at 888-989-7223, on the web using our live chat, and via our email address.