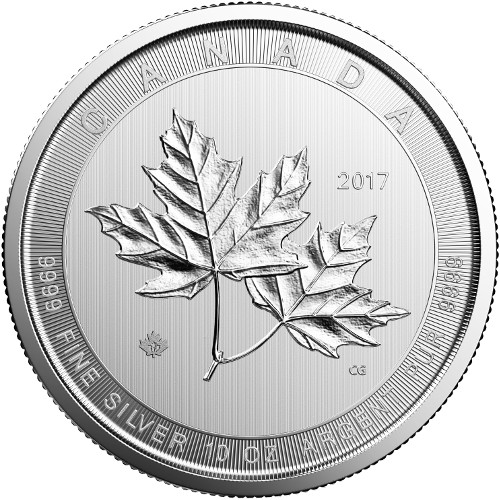 For more than two centuries, the maple leaf has served as an emblem representative not only of the vast natural diversity of Canada, but also the emerging diversity of the people who call it home. The variety of maple leaf species in the country reflects the diverse background of First Nation, French, English, and other European settlers in this beautiful nation. Today, the 2017 10 oz Silver Canadian Magnificent Maple Leaves Coin is available to you today online at Silver.com.

Silver Canadian Maple Leaf coins are nothing new from the Royal Canadian Mint. The official silver bullion coin of the nation, this coin is released each year with a sugar maple leaf design on the reverse face of the coin. However, this new 2017 10 oz Silver Canadian Magnificent Maple Leaves Coin is a new take on the traditional bullion coin.

The sugar maple leaf is the most common species of maple tree in Canada, and it has become a symbol synonymous with the nation of Canada. Not only do professional sports teams and major corporations in Canada use the sugar maple leaf as a logo, but it has been seen around the world on the shoulders and helmets of Canadian troops dating back to the Boer Wars the British fought in South Africa.

All 2017 10 oz Silver Canadian Magnificent Maple Leaves coin listed here is in BU condition. Coins in BU condition show no signs of wear and tear, though you are likely to notice minor flaws ranging from breaks in the luster and spotted surfaces to contact marks from the production process at the mint.

The obverse of these beautiful silver coins features the 2003 depiction of Queen Elizabeth II created by Susanna Blunt. This image debuted on the Silver Maple Leaf in 2004, and is the third to appear after Arnold Machin’s depiction (1989-90) and Dora de Pedery-Hunt’s version (1990-2003).

Please don’t hesitate to contact Silver.com with questions. You can reach us on the phone at 888-989-7223, chat with us live online, or email us directly. You should also considering visiting our website for the latest silver prices.