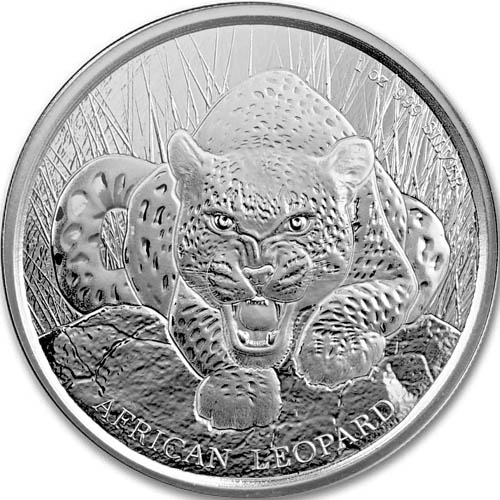 African Leopards may go by one species name, but they are far from uniform in appearance, size, and habitat. At one point in history, the African Leopard could be found in various ecosystems throughout the African continent, from the arid deserts surrounding sub-Saharan Africa to the rainforests of its central highlands.

Today, the African Leopard is rare throughout much of West Africa and a small population resides within the Atlas Mountains of Morocco. Leopards in southern Africa are often smaller in size than those inhabiting the northern reaches of the continent, and coloration on the cats ranges from a light yellow or tawny color, to deep golden shades and even all black.

The Bank of Ghana authorized production of the new 2017 1 oz Silver Republic of Ghana African Leopard Coins by Scottsdale Mint, with each coin issued a face value of 5 Cedi. This is the current legal tender used in Ghana.

On the obverse of each coin you’ll find the image of Queen Elizabeth II. Captured in right-profile relief, you’ll notice this side of the coin has a textured background surface that reflects the look of a leopard’s actual spots.

The reverse of all 2017 1 oz Silver Republic of Ghana African Leopard Coins features the image of a leopard. The predatory cat species is depicted on this face as it stealthily moves through a patch of tall grass as it stalks its prey and prepares to pounce for a meal.

Each Silver Republic of Ghana African Leopard Coin is available in BU condition. Coins in BU condition show no signs of wear and tear. However, minor flaws from production at the mint are possible and include breaks in the luster, spotted surfaces, or contact marks.

Please don’t hesitate to call Silver.com at 888-989-7223 with questions. You can also connect with us online through our live chat and email address.

Country: Democratic Republic of the Congo