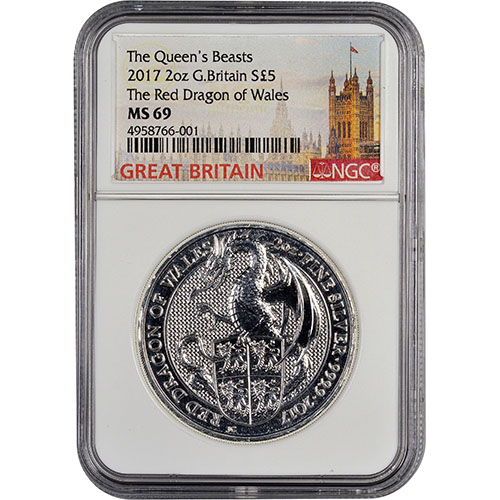 In the Queen’s Beast Series from the Royal Mint of England, those buying silver will find 10 different designs offered in bullion and proof versions. Each of the silver coins in the collection includes a 2 oz bullion coin and four different proof weights. Right now, 2017 2 oz Silver British Queen’s Beast Dragon Coins are available to purchase online at Silver.com in near-perfect condition.

Each 2017 2 oz Silver British Queen’s Beast Dragon Coin listed here comes with a near-perfect certification of Mint State 69 from the NGC. Coins in this condition exhibit full, original mint luster and feature a maximum of two minor detracting flaws. Examples of flaws acceptable at this certification level include minuscule contact marks or hairlines found outside the primary focal points of the coin.

The Red Dragon of Wales has long been an official emblem of the Welsh people, but it wasn’t until 1959 that Queen Elizabeth II formally established the Red Dragon as the nation’s recognized emblem and it was placed on the national flag. The dragon’s history dates to the 6th century in Wales and was popular in the royal arms of the House of Tudor.

On the reverse of 2017 2 oz Silver British Queen’s Beast Dragon Coins is the image of the Red Dragon of Wales supporting the shield of Llewelyn ap Griffith, the last native Welshman to hold the title Prince of Wales. His shield includes four quadrants, each with a leopard in passant guardant stance.

The obverse of 2017 2 oz Silver British Queen’s Beast Dragon Coins features the effigy of Queen Elizabeth II. Her Majesty is featured in right-profile relief in the fifth-generation portrait from Jody Clark.