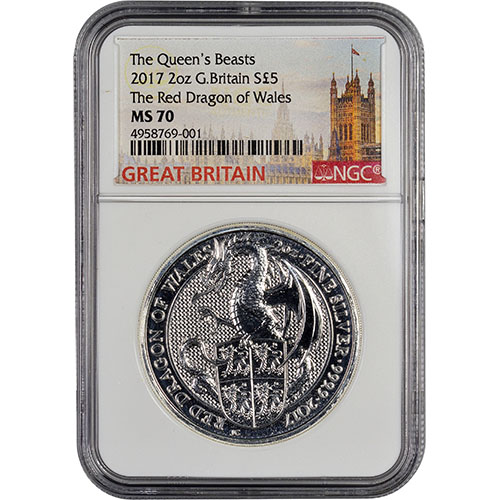 The dragon is, arguably, the most common mythical beast in cultural lore around the world. Depicted in cultures from China and Southeast Asia to continental Europe, the dragon has featured prominently in the heraldry of the British Crown over the centuries. Now, 2017 2 oz Silver British Queen’s Beast Dragon Coins are available to you for purchase online at Silver.com in perfect condition.

The Red Dragon’s origins in the British Isles date to the sixth century in Wales. Early Welsh chronicles speak of the red dragon of Cadwallader, the legendary king of Gwynedd. Owen Tudor, the grandfather of King Henry VII of England, claimed Welsh heritage and used the red dragon in his personal shield.

On the reverse of 2017 2 oz Silver British Queen’s Beast Red Dragon Coins is the image of a powerful dragon supporting a shield. This quartered shield features a leopard in each quadrant and is reflective of the shield of Llewelyn ap Griffith, the last native Prince of Wales.

These 2017 2 oz Silver British Queen’s Beast Dragon Coins are available to you in perfect condition from the NGC. Coins with a Mint State 70 certification showcase full, original mint luster with no detracting flaws of any kind present.

We encourage Silver.com customers to call us with questions about silver coins for sale at 888-989-7223. You can also connect with us online through our live chat and email address features.